Culture journalist and writer, AnoteAjeluorou, fulfilled a long-held dream recently when he presented his debut book, Igho Goes to Farm, to Professor Wole Soyinka and also disclosed why he wrote it during activities marking the Nobel laureate’s 85th birthday

Arts and Culture
By Akintayo Abodunrin On Jul 21, 2019 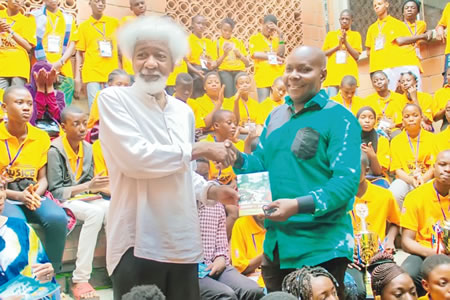 Ajeluorou presented the book during activities of the 10th Open Door Series/Wole Soyinka International Cultural Exchange (WSICE) held in Lagos and Abeokuta on July 12 and 14 to celebrate the icon’s 85th birthday.

Speaking at Freedom Park during a symposium with the theme Rights, Honour, Respect, Patriotism, Tolerance, and Humanism of Soyinka’, the author disclosed that Igho Goes to Farm, his debut children’s fiction, is a love letter he wrote to his childhood.

He explained that writing the book is a way of reconnecting with his younger days in the small Delta State community of Ibedeni, where the story is mostly set.

The writer who works at The Guardian described childhood as the best years of any human being and that how he/she is nurtured during those early years is critical for the individual’s later years as an adult.

He noted that parents must be careful in raising their children and that storytelling was a significant part of his childhood. Igho Goes to Farm, he added, is a result of that experience, especially the folktale Igho’s grandma shared with him and his cousin, Onome, in the book.

He further told the students that the title of the book echoes another famous childhood storybook, Eze Goes to School, written in the 1970s by Onuorah Nzekwu and Michael Crowder. The idea, according to him, is to also draw attention to the older work (Eze Goes to School) as complementary reading material for young readers.

At the Ijegba Forest home of the Nobel laureate also fondly called Kongi in Abeokuta, where he presented Igho Goes to Farm to him, Ajeluorou admonished children who were part of the celebration to read Ake: The Years of Childhood, written by Soyinka. He said while Igho Goes to Farm is a fictional work, Ake is the real childhood story of Soyinka. “If you wish to understand his (Soyinka’s) background, his parents, his upbringing and formative years, you should look for Ake and read it!”

A special reprint edition of Igho Goes to Farm, facilitated by the WSICE, was distributed to students from across the country who had gathered to celebrate Soyinka’s birthday during the annual feast. Eighty-five secondary students who excelled in an essay competition gathered in Lagos, Abeokuta, and Akure to felicitate with the literary icon in a number of dazzling cultural programmes that offered them glimpses into the life of Soyinka.

Professor Soyinka also hosted the 85 finalists at his Ijegba Forest home in Abeokuta, where they also interacted with him.

Earlier, Ajeluorou had expressed delight at his participation at the cultural feast to celebrate a  mentor and present his book to pupils for whom it is specially written.  He also expressed gratitude to the Zmirage Multimedia Ltd crew, particularly its CEO, Alhaji Teju Kareem, and programme consultant Jahman Anikulapo, for the collaboration and opportunity to speak on writing and why his book would be an essential companion to the pupils.

“OpenDoorSeries/WSICE is a huge platform to present an important small book as Igho Goes to Farm,” Ajeluorou had said. “The young ones are very impressionable, and they need guidance, so they don’t stumble. ‘Igho Goes to Farm’ speaks to their concerns and how to help them navigate some of the modern distractions that can derail them from getting the best from their educational quest, particularly smartphones and social media.

“The book also addresses Nigerian adults on being patriotic. Why have Nigerians failed to develop the country’s tourism potential? Why do Nigerians always travel abroad for holidays? Why don’t they patronise local goods and products? Why spend scarce resources on different products and goods? These are some of the concerns Igho Goes to Farm tries to address subtly as the youngster lead character is shipped off to the village to spend his long holiday because he fails to perform well in his schoolwork while his siblings go to Disneyland in America.”