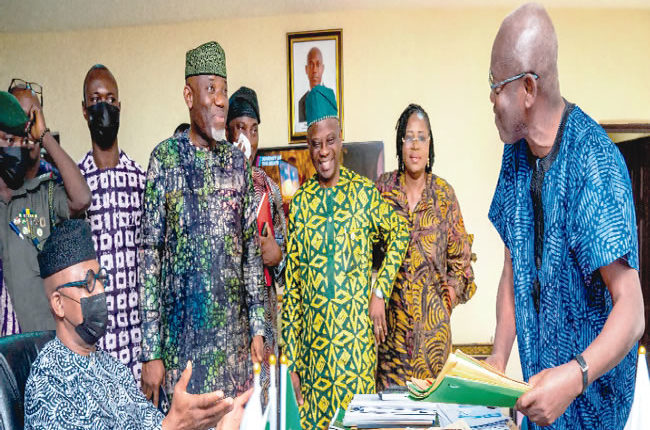 Friday, August 5, 2022 will remain indelible in the minds of many civil servants in Ogun State. That day, Gov. Dapo Abiodun cast off the seeming larger-than-life image of a State Chief Executive and decided to hobnob with the workers. After driving in his car without a chauffeur, many of his aides were motioning to climb the stairs to his office when he changed direction. Into the offices of the civil servants he headed, starting from the security post.

It was an unusual day for many civil servants in the Ogun State public service. Many had come in and continued their routine works when the august visitor walked in. “Good morning, colleagues,” he said as he popped hands with the startled workers. It was the first time they are meeting the governors at close range. This day, it was one-on-one as he interacted with them asking questions about family, work schedules and agenda for the day. It was a pleasant surprise.

But the governor says it is not unusual.

“I have come here this morning to see how the workers are doing, check on their welfare and familiarized myself with the office environment. I am happy with what I have seen though there few things to be done”, he quipped as journalists who equally thought it was unusual to see him walk round offices like that since he assumed office.

“But it is not unusual.  They are the first line to propagate the message of creating an enabling environment for people to come and invest in the State and so it is important for me to go round and see how they are faring”, he says.

But why did he chose to make it impromptu, unscheduled? Governor Abiodun, an oil magnate and boardroom guru describes such as part of the new things to ensure that people are where they are supposed to be and not by coercion on prompting.

“The primary reason was to first check on them, check on their welfare, see how they are situated in their offices and also get to familiarize myself with their office environment and then while doing that see what facilities they have or they lack and just generally appraise myself with how they are. And that is not unusual. We work together, they are always in my office and it’s being a privilege for me to walk around and feel their pulse and see how they are”.

For the Secretary to the State Government, TokunboTalabi, he was caught unawares. “I think everybody was caught unawares. But from an administrative perspective, it is a very important way to motivate people; it strengthens the cord between His Excellency and most people who are on the street”, he said, noting that “I believe that it is also another flair in trying to make sure that the team stays together because building our future together requires A to take care of B and B takes care of C.

“So if you go to my apartment, I am happy that you are there, when you then come to visit me also, it is a different flair, it keeps everybody on their toe because it might be you tomorrow.”

As excited workers trooped out to catch a glimpse at him, some seeing him for the first time at close range wondered what has changed. But that was not the first time Governor Abiodun who promised that: “Other MDAs (ministries, department and agencies) that I didn’t go to today should expect their own unscheduled visit. It is to motivate them and to be sure all of us share this dream. I am pleased with how conscientious those I met today are and hope, majority of our workforce will by their work ethics and attitude encourage us to do more in terms of service delivery and welfare packages”

A day after he was sworn into of office, Governor Abiodun held a series of meetings with all cadres of civil servants in the state and ended it with the Permanent Secretaries in the state’s civil service. His intent, he said then, was to have a detailed knowledge of the situation of the state.

At the meetings, he tasked them to rise up to the challenge of “Building Our Future Together” Agenda of his Administration and be ingenious in the discharge of their responsibilities as frontrunners in driving the wheel of progress in the state in the next four years and beyond.

Like he did on Friday, Gov. Abiodun took the opportunity to intimate them with his vision to reposition the civil service as an efficient organ of government. He minced no word about his resolve to address the anomalies of the appointments into the top echelons of the civil bureaucracy.

Since then all senior appointments have been conducted in line with government’s desire to fill the existing vacancies among the rank of the state public service with seniority, merit, professionalism and diversity as primary consideration and in accordance with Section 208 (c) of the 1999 Constitution of the Federal Republic of Nigeria (as amended),”

Gov. Abiodun also made good his promise to mainstream some 2,000 staff with forlorn hope. They had been recruited without posting and documentation by the immediate past administration on the eve of its departure.

This promise was immediately matched with legislative imprimatur of the State Assembly, which reversed the appointments and classified them as actions taken in bad faith and without due process.

This move has been appraised by many as good for the morale of the service as most of such appointments were politically motivated and could manifest as a landmine to sabotage the incumbent governor.

Expressing confidence in the civil service, which he called the engine room of good governance, Governor Abiodun thumbed his chest saying, “All our appointees into all leadership positions – Principals General, Tutors – General, Accountant General, Solicitor General and Permanent Secretaries are men and women that have been found worthy in character and cerebral capacity by excelling in the Assessment and Evaluation Programme, in line with Ogun Standard. I have declared that the era of lobbying in the Ogun Civil Service is over.

“For emphasis, the era of lobbying is over. I salute members of their families on these well-deserved appointments. I must say that by your deeds, on and off the statutory duties, as Public Servants, you have demonstrated that you are of excellent parentage and thorough bred. You are joining a group that has carved an enviable niche for itself in our Administration with its superlative performance. You have all demonstrated uncommon commitment to the successful implementation of the “Building our Future Together” Agenda.

The State Head of Service, NafiuAigoro, the first medical doctor to occupy the office said he was simply “wowed by the impromptu visit”.

“It was a surprise and we are happy. This is a morale booster for the workforce. Everybody was surprised. The workforce would have not have known that the Executive Governor of the state could visit their offices and some other offices.

“It shows that they are not being left to their devices, just working. So, it has created surprise, it’s actually great news that all Permanent Secretaries and all the people down the line will know that they have to be at their duty posts as the Governor can visit any of the offices at any point in time. We are grateful to his Excellency for this, we thank him for doing this for us.”

On the supposed outcome of this kind of visit, Aigoro posited that “the Gov (Abiodun) had enthused that he was happy but there are one or two things that he thinks are lacking and we are going to make sure those gaps are closed. From time to time, he will continue to do this (unscheduled visitation to offices of the civil servants). There are other ministries that he didn’t go to today: he would touch, ministry of transportation, women affairs, youths and sports particularly. He will not announce it; he will surprise everybody”, adding that “My advice for them (workers) is that they should continue to do what they are doing. We are all here to work together in building the happy future of Ogun State together.”

Abiodun has demonstrated good faith commitment to the welfare of the state’s work force. Salaries are being paid every month – one of the three states not owing in the South West, and was one of the earliest to key into payment of N30,000 new minimum.

According to him, when came into office on May 29, 2019, the state head of service told him that they had “very little or no money” in the treasury.

“So, I called the head of service; I told him we must pay salary. But he said to me, ‘You are new in government and everybody understands that you just assumed office and we don’t have that expectation of you paying salaries now. They (workers) will understand. There is very little or no money. We can talk to them. I told the head of service, whether they (the workers) were expectant or not, it was my promise to the people that salaries would be paid as and when due.

“So, I picked my phone and called my friends who are MDs in different banks. I told them I needed to pay salaries and this is the little I have; almost nothing in the state account. I requested for a credit facility to allow me to pay over N7bn which is the state wage bill. That day, my intention was that maybe one or two will oblige me, but the five banks I called obliged me”. The story has been moving from good to better month in, month out, even with the new minimum wage and outstanding pension and gratuity arrears being paid.

Celebrations as Omisore gives daughter out in marriage

Do they know it’s Children’s Day?