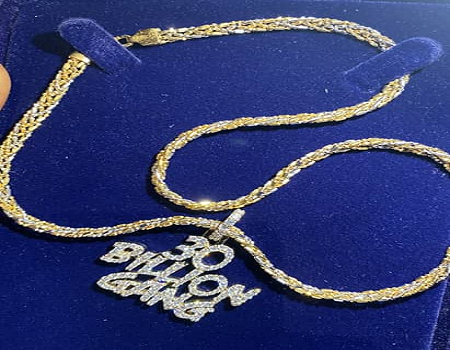 Nigerian singer, songwriter, and record producer, David Adedeji Adeleke aka Davido, has deposited the sum of $100K (N36million) to purchase customised jewelry for Zlatan Ibile, Skibii and seven other members of his 30BG (30billion gang)

The singer rewarded the Nigerian rapper, songwriter and dancer Omoniyi Temidayo Raphael aka Zlatan Ibile, who is also in the United States of America with a customized neck chain and 30 BG pendant.

Zlatan got his gift from Davido after he attended the 40th birthday of the singer’s big brother and also met his dad, Dr Deji Adeleke.

The delighted Zlatan took to his Instagram page @Zlatan Ibile to show gratitude to Davido.

In the same light, Davido displayed a customized neck chain pendant with the inscription ‘Skibii’ which he bought for Nigerian popular singer, Abbey Elias, aka Skiibii Mayana.

The 30BG crew was also not left out as seven of the members, Davido’s 30BG, Asa Asika, Special Spesh, DJ Ecool, Tungee, Lati and Tycoon got the special 30BG championship ring.

NAN Recalls that in August 2019, Davido purchased a new diamond finger ring known as the 30BG championship ring worth over N54million.

Davido’s 30BG championship ring has 696 diamonds on it.

The expensive jewelry was purchased from Zaheer of Icebox Diamond and Watches in Atlanta, U.S.

Zaheer of Icebox diamond and watches in Atlanta disclosed that Davido’s customised ring was the ‘biggest championship ring he’s ever made with so many carats.’

Edo assembly: issues elects ultimatum to be present for swearing-in