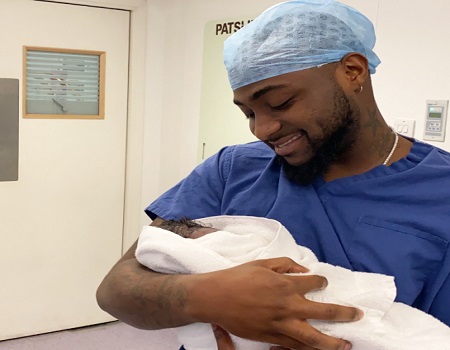 Davido and Chioma have welcomed their first baby together on Sunday in London.

The superstar took a trip to London from the United States to be with his fiance who was in the delivery room while #StarboyFest and #Headies Award 2019 were ongoing in London and Lagos respectively.

The “Blow My Mind” crooner took to his Instagram Story to upload a picture of himself in the delivery room with Chioma and also confirmed the baby to be a male as he names him after himself.

When the video was posted at first, it wasn’t clear to everyone exactly what happened in the video, however, he made it clear on Twitter exactly what was happening in the video as he revealed he is with Chioma in the delivery room after a fan asked about his album.

He wrote; “I dey delivery room now brother! Make we talk the matter after.”

I Dey delivery room brother ! Make we talk this matter after ❤️ https://t.co/vzBKgrUmDe

Davido to make Hollywood debut in ‘Coming to America 2’