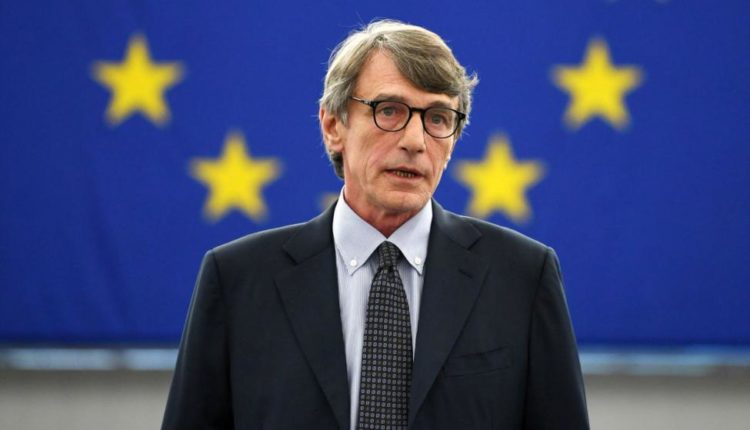 Mr Sassoli, 63, received the support of 345 out of a total of 667 MEPs in the second round of voting in Strasbourg.

The centre-left politician beat three other candidates and will assume the role of assembly speaker immediately.

The vote comes a day after EU leaders agreed on nominations for the bloc’s top jobs, with a woman for the first time proposed as European Commission chief, BBC reports

In a speech following Wednesday’s result, Mr Sassoli spoke of an “imperfect” union in need of reform, calling for the EU to return to the spirit of its founding fathers, who swapped warfare and nationalism for peace and equality.

“We need to strengthen our capacity to play a leading role in democracy,” he said, focusing particularly on the need for reform to the EU’s system for asylum seekers. “You can’t continue to kick this down the road. We don’t want citizens asking ‘where’s Europe’ every time an emergency happens.”

He then described Brexit as “painful”, adding: “The European Parliament will guarantee the independence of European citizens – only they are able to determine their history.”

Mr Sassoli replaces another Italian, ex-army officer Antonio Tajani. The night before, marathon talks over who will take over the EU’s top jobs came to a close with the surprise choice of German Defence Minister Ursula von der Leyen to replace Jean-Claude Juncker.

Mrs von der Leyen was due to visit MEPs on Wednesday to discuss her nomination. If her candidacy is rejected, national leaders will have a month to nominate a replacement.

On the face of it, it’s a historic double first for Europe, the nomination of two women, Ursula von der Leyen and Christine Lagarde, to lead the European Commission and the European Central Bank respectively.

For some media, however, it’s very much a return to business as usual after turbulent times.

It amounts to a successful operation by French President, Emmanuel Macron and German Chancellor Angela Merkel to “solder the Franco-German tandem back together again”, according to right-leaning French daily Le Figaro.

The choice of a German and Frenchwoman for the EU’s top jobs “shows a rebalancing in favour of the big countries, especially the Franco-German tandem, and confirms that Europe remains a Carolingian affair”, writes the left-leaning French daily Libération, referring to the medieval empire which straddled what are now Germany and France.

Italy’s left-leaning daily Il Messagero detects a level of cynicism worthy of the historical film The Leopard. In that film, a noble family grapples with revolutionary times by adopting the principle that “for things to remain the same, everything must change”.

“Behind the new feminine face of the community leadership,” the paper writes, “is a Leopard-style operation in the sense that the change is a return to the Franco-German monopoly über alles”, Il Messagero deliberately uses the German term for “above all else”, with its Nazi-era connotations.

Christine Lagarde, the French current head of the International Monetary Fund (IMF), has been nominated as the first woman to lead the European Central Bank (ECB).

Our best not good enough ― Buhari