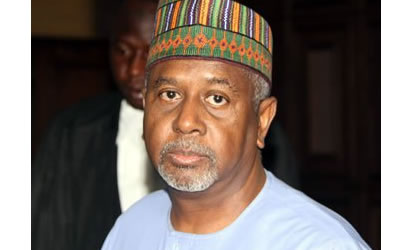 The federal government, prosecuting the former NSA over the alleged fraud failed to produce him in court as at the time the trial was shifted to September 27, 2017 by lawyers in the matter, which has a former Minister of State for Finance Bashir Yuguda, former Sokoto State governor, Alhaji Attahiru Bafarawa, his son sagir Bafarawa, former Director of Finance in the office of the NSA, Salisu Shuaibu and Dalhatu Investment Ltd as defendants.

The trial could not proceed as Justice Baba-Yusuf was said to have travelled outside Abuja on an assignment.

Although, the court clerks declined comments, it was learnt that the Judge was part of the Federal Capital Territory Judiciary delegation attending the burial ceremony of Justice Victoria Ayodele Uzo-Amaka Onejeme, a pioneer Judge of the Abuja High court who died recently.

Eminent Lawyers in the case, including Chief Olajide Ayodele (SAN), Dr Kayode Olatoke (SAN) and Mr Akeem Afolabi (SAN) among others left the court room around 11am when information filtered to them that the trial will not proceed.

However, after consultation with each other, the lawyers and the court officials shifted the prosecution till September 27, 2017 in view of the forthcoming annual vacation of the court scheduled to begin on July 10 and terminate in the middle of September.

The Federal government had on January 24 re-arraigned Dasuki and other defendants on a 22-count charge due to the transfer of the charge from Justice Peter Affen to Baba-Yusuf as part of case management.

The defendants were accused of breach of trust, money laundering and diversion of public funds since 2015 when they were first arraigned in court.

While the bail granted other defendants was obeyed by the federal government, that of Dasuki was not as he was re-arrested on December 29, 2015 at Kuje Prison shortly after he perfected bail conditions and had since remained in the custody of the Department of State Services (DSS).

Judge withdraws from suit against Ize-Iyamu