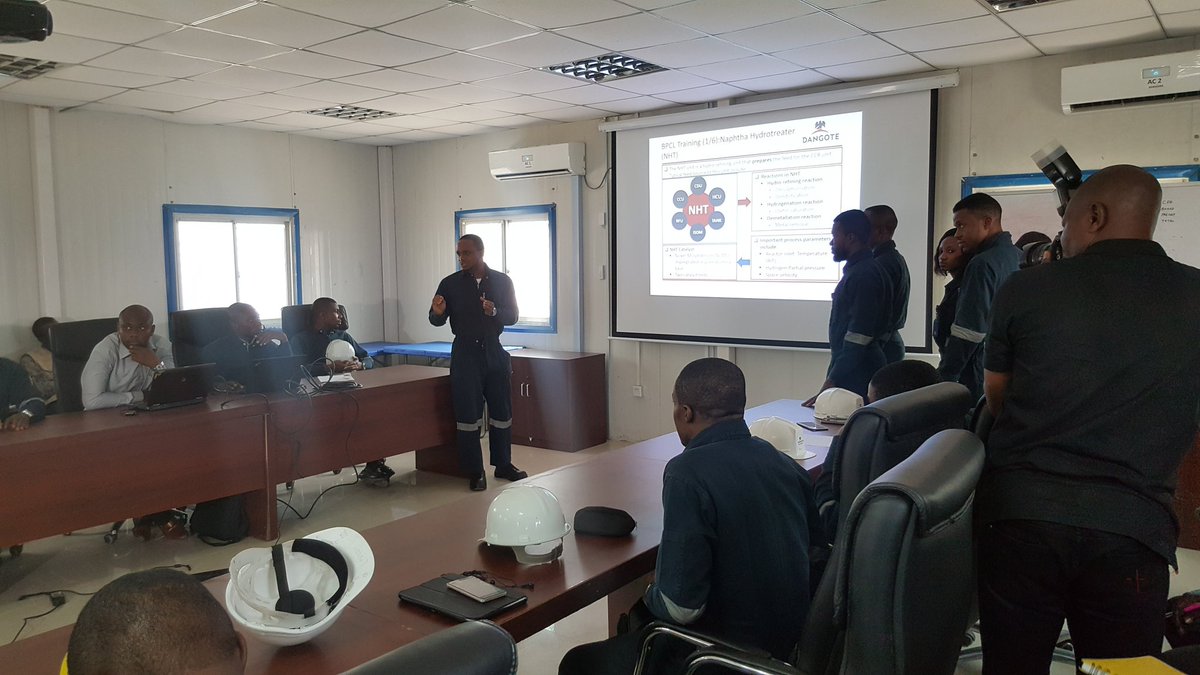 NEWLY trained Dangote Refinery graduate engineers have promised an end to the ongoing fuel scarcity in the country when the Refinery takes off.

The engineers just returned from a training programme at Bharat Petroleum Corporation Ltd. in India, the company said today.

The engineers have promised to deploy the knowledge and skills acquired during the training to ensure Nigeria is saved the embarrassment of fuel scarcity when the refinery comes on stream.

The engineers, who described their experience as second to none in the history of Nigeria oil and gas sector said never again would Nigeria experience fuel scarcity as the Dangote Refinery would be operated in the most efficient manner.

According to a statement, the Dangote Refinery, in preparation for takeoff, has been sending in batches Nigerian engineers to Bharat Refinery in India, arguably the biggest in the world for training in refinery operation and production.

The Dangote Refinery is Africa’s largest, with a capacity to produce 650,000 bpd. It is billed to commence operation soon.

The Nigerian engineers shared their experience with the management members at the Refinery premises at Lekki. They said they had both theory and practical training in India.

The engineers also said that it was a rare opportunity to witness a refinery of the Dangote’s size being built from the scratch.

Opeyemi Oyedepo, Process engineer and Igwe John, petroleum and gas engineer told the management how they were made to be part of troubleshooting during their training, a development that has boosted their confidence that Dangote Refinery with most modern facilities will eradicate perennial fuel scarcity in Nigeria.

The Graduate engineers also said they learnt, as part of their training, efficient refinery operations and adherence to quality and standard.

Technical Adviser to Dangote Refinery, Mr Babajide Soyode expressed satisfaction that the best of the graduate engineers were selected as attested to by the trainers in India.

He said the management was proud of the engineers as they have displayed a thorough understanding of what they learnt in India.

Soyode said the Dangote Refinery chose Bharat, as the training ground, because it is the biggest refinery in the world and is ready to train young engineers, unlike the disposition in Europe and other parts of the Western world.

The company’s Director of Human Capital Management and Project Support, Mohan Kumar, while presenting the returnee engineers said the company is laying a solid foundation for takeoff with the training of the engineers.

He said the young engineers were trained on how to manage the operations of the refinery.

Kumar added that the engineers had gathered fundamental practical knowledge about refinery.

According to him, the engineers are recruited and trained to witness the building of the refinery from scratch.

He said the engineers spent two months in classroom training and three months on the job training.

Kumar explained that the engineers were trained by experts, who had over 45 years experience in refinery operations.

He said that the training became imperative due to the commitment of Dangote Group to promote local content by developing indigenous capacity.

He stated that “the engineers are expected to also transfer the skills acquired to other Nigerians when the refinery comes on stream.

Tramadol is dangerous if used for delayed ejaculation ―expert

NNPC gets $1bn to fund upstream operations of NPDC