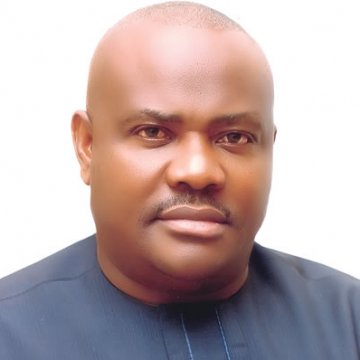 DIRECTOR-General of Nigerian Maritime and Safety Agency (NIMASA), Dr Perterside, on Wednesday, lashed the Rivers State governor, Mr Nyesom Wike, over his decision to place ransom on certain 32 verified notorious cultists, kidnappers, and others in 12 local government areas of the state, describing such move as mere smokescreen to cover the failure of his regime to protect the people he swore an oath to protect.

Dakuku, who said this in a statement titled, ‘Wike’s latest offer on criminals, another smokescreen to cover failure,’ made available to the Nigerian Tribune, charged the Rivers State governor to end what he termed “this blame-game” in the interest of those that were brutally murdered in the incident and work with the Federal Government to end the tragedy.

“The latest broadcast by Rivers State Governor, Ezebuwon Nyesom Wike, CON, GSSRS in which he named and placed cash ransom on certain 32 verified notorious cultists, kidnappers, terrorists, and murderers in 12 local government areas is a mere smokescreen to cover the failure of his regime to protect the people he swore an oath to protect,” Dakuku said.

According to him, Wike’s speech is nothing but an attempt by him to massage a people already traumatised, who daily bear the marks of their bruised pride, saying the agony of the situation was exacerbated by the knowledge that while Rivers burnt and roasted, the state governor cared less.

“That speech is nothing but an attempt by Wike to massage a people already traumatised, who daily bear the marks of their bruised pride. The agony of this situation is exacerbated by the knowledge that while Rivers burnt and roasted, Wike cared less,” the NIMASA boss said.

Dakuku faulted the claim by Wike that it was his visit to the families of the bereaved in Omoku and the pledge of N200 million ransoms he made on the alleged killers on New Year Day, which led finally to the security gunning down the chief suspect, Johnson Onyedibia, aka Don Wani.

He said the fact was that in a state where a sitting governor valued the lives of his subjects, such calamity would have warranted a visit same day.

Part of the statement reads: “But it took Wike days and that was after he had been informed that President Muhammadu Buhari, GCFR, was sending the Interior Minister to visit Omoku. So, in the face of this even Wike’s visit to Omoku belies sincere grief for the families.

“As always, rather than own up to obvious failure, Governor Wike made an unsubstantiated allegation against an unnamed ‘former governor and his ilk,’ claiming they had interfered with the state government’s amnesty programme. Lies, no matter how long told, will never cover the truth which in this instance is that Wike’s Amnesty programme was not planned to end insecurity in Rivers State but to offer state cover to designated criminals for purposes known to their patrons.

“In his warped understanding of governance, Wike believes that offering financial baits would turn his page of complicity in this whole saga around.

“Rivers people cannot be fooled by this display of ineptitude. Wike’s offer of another tranche of cash to criminals is no remediation for the pains, loss , and agony caused families.

“Leadership is humane. This is an attribute grossly lacking in the man who oversees the once-sought-after Rivers State. How can Wike face families whose breadwinners and loved ones were gruesomely murdered by the criminals to tell them that oil companies, other politicians outside his fold, Federal security agencies were liable for the murder of their loved ones? How can Wike stand against good conscience and the families of the 23 massacred on New Year’s Eve in Omoku, to absolve himself of their death being the state Chief Security Officer of the state? Has Wike bothered to empathise with Egbeda community for the gruesome murder of her mothers, father, sons, and daughters a few days back?  The situation in Andoni is no less worrisome. Can Wike in good conscience, absolve himself of the bloodbath that has turned the state into “Rivers of Blood?”

“Good conscience would not absolve the guilty. Would he as the Chief Security Officer of the state, with unhindered access to daily security statistics, feign ignorance of black spots and flashpoints in the state he was expected to be governor?

“Wike cannot deny that there existed a functional security architecture the previous Administration had instituted that secured the state and made it inhabitable. Being a key player in that Administration, at least, in its early days, offered him huge access to that structure. But Wike, rather than strengthen it, blew all away in his attempt to erase records of his predecessors. In the face of this, if anybody played bet with the lives of Rivers people, it was Wike.

“Wike’s speech was a warped absolution that presented those persons named as the reason the state had collapsed right in his hands. Nothing can be farther from the truth than that.

What Wike has done, therefore, amounts to submitting to admittance that he reneged on his oath of office, and so, had failed Rivers people.

“If not, how could it take Wike over 30 months to admit in public that the real governors of Rivers State were criminals? Rivers State is already flat. The statistics say so. In its recent listing, a verified agency listed the state as the most miserable state to live in Nigeria at 79.37% rate. With unemployment and underemployment rate at 61.4, the highest in the country, and inflation at 18.01%, the state is already broken.

“The best that Wike can do for the state at the moment, is to end this blame-game and sincerely, for the sake of the state, and for the memory of those lives had been brutally ended due to the state’s Siddon-look, work with the Federal Government to end this tragedy.”