Entertainment
By Adam Mosadioluwa On Dec 8, 2022 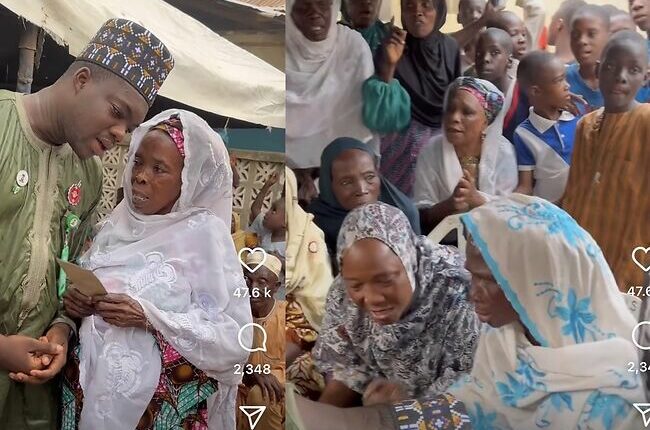 Popular skit maker and comic actor, Abdulgafar Ahmed Abiola, better known as Cute Abiola has melted the hearts of many after using his first salary as the Special Assistant (SA) on Creative Industries to the Governor of Kwara State, AbdulRahmam Abdul Razak to support 60 widows and elderly women from his constituency.

The former Navy personnel made this known via his verified Instagram page in the late hours of Wednesday, December 7.

According to him, immediately after his appointment as Special Assistant by the Kwara State Governor, he made a covenant with God that his first salary from the office would be used to help his constituency people, especially old women and widows.

In an emotional video posted on his page, the comic actor could be seen interacting with his constituency people while he handed envelopes to them.

Excited by the skit maker’s act, the elderly women showers him with prayers which moved him to tears.

Captioning the video of his visit to his constituency, he wrote, “On November 4, 2022, when I saw my appointment as the SSA to the Governor of Kwara State on Creative Industries, I had a strong covenant with God that I will use my first salary in office to support old women and widows.

“Today, I am indeed glad to have supported 60 women with my first salary in office. I pray that God continues to give me the strength to continue this template.”

The Nigerian Tribune had earlier reported how the skit maker announced his exit from the Nigerian Navy a few hours after he was appointed as SA by the Kwara State Governor.

FG confirms arrest by ICPC over diversion of N-Power fund