by Tribune Online
in Metro
Reading Time: 6 mins read
A A

Speaking with journalists in Ilorin on Tuesday while handing over the seized drugs to the state command of the National Drug Law Enforcement Agency (NDLEA), the state Controller of the Nigeria Customs Service, Comptroller Ahmed Hussaini Bello, said that the seizures were made in February this year. 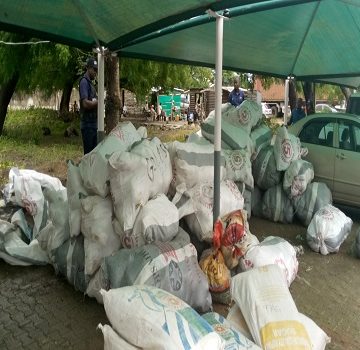 He said that the command decided to hand over the seizures to the NDLEA, “having recognized the critical role the NDLEA played in safeguarding the nation of dangerous drugs”.

He explained that the Customs Service and the NDLEA had never had any lapses in interdepartmental collaboration as erroneously held in some quarters, saying that the NDLEA is a federal agency established and charged with responsibilities of eliminating the growing, cultivation, processing, selling, trafficking of hard drugs and investigating persons suspected to have dealings in drugs and other related matters.

He also reiterated the determination of the customs service to rid the state of all prohibited goods, saying that the ban on importation of foreign rice, used vehicles through the land borders, vegetable oil, second-hand clothing, used tyres and other dangerous drugs such as tramadol, marijuana is still in place.

Also speaking, the NDLEA state Commander, Ambrose Umaru, who confirmed that there is a robust relationship between the two security agencies, said that the seizures would be destroyed through burning in the presence of the media and stakeholders soon.