Customs officer, one other killed in Oyo 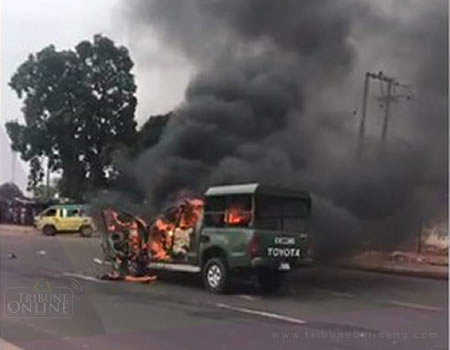 A Customs officer and one other person were on Thursday evening killed in Saki community, Oyo State following a clash between indigenes of the town and Customs operatives.

Tribune Online gathered that some Customs operatives had chased an indigene into the town for alleged smuggling activities.

During the attack, a Customs official was reportedly killed while a patrol vehicle was destroyed.

The state Police Public Relations Officer (PPRO), SP Olugbenga Fadeyi, who confirmed the development, said operatives of the Saki Area Command had been deployed to the town to forestall further breakdown of law and order.

The police spokesperson said those who allegedly chased the suspected smuggler into the town were members of the Joint Task Force and not the Customs patrol team.

It was also gathered that the Okere of Saki, Oba Khalid Olabisi, had declared a curfew in the town to prevent the crisis from escalating.

Just last week, there was an incident involving operatives of the Federal Operations Unit of Customs at Iseyin, where a transport official was shot at a motor park in the town.

The Customs operatives had chased a commercial vehicle suspected to be conveying smuggled rice to the Iseyin/Ibadan motor park when the incident occurred.