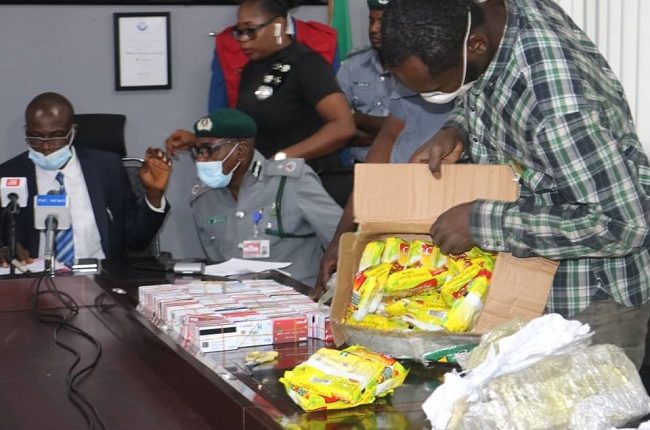 The Deputy Controller of customs in-charge of the MMIA, Abdulmumin Bako in a media briefing on Thursday explained that four Subscriber Identification Module (SIM) cards were also intercepted with the suspect.

According to DC Bako, “The suspect, one Ishaq Abubakar with Passport Number A08333717 from Kano State was intercepted when he was travelling to Dubai via Emirates Evacuation flight. 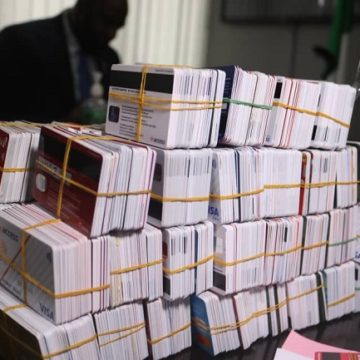 “At about 1145 hours on Aug. 22,  at the departure hall gate ’B’ of the MMIA, Abubakar with Passport Number A08333717 from Kano State travelling to Dubai via Emirates flight was intercepted with 2,863 ATM Cards and 4 sim Cards by our officers on duty.

“The ATM cards and sim cards were carefully concealed in a noodles carton by the suspect.

“The suspect claimed that one Mr Musliu was assigned to him to facilitate his movement through the checks at the airport by one Mr Suleiman but the concealment was revealed due to the due diligence of our Officers who insisted on conducting a physical examination.”

He added that the suspect and the items would be handed over to the EFCC for further investigation as directed by the Comptroller General of Customs.

Bako pointed out that the suspect claimed that he was due for evacuation and had bought an evacuation flight ticket for his use.

The Customs Legal Adviser, Mr Smart Akande noted that handing over the suspect to EFCC showcased inter-agency collaboration as Customs does not have the jurisdiction to prosecute but to arrest.

“What we have here is the case file, ATM cards and the noodles used in concealing the ATM cards and we are handing them over to EFCC for further investigation and prosecution,” the Customs Legal Adviser added.

In his own presentation, the Lagos Zonal Head, EFCC, Abdulrasheed Bawa said the ATM cards could be used for money laundering or Foreign Exchange Malpractices.

He, however, vowed that everyone involved in the conspiracy will be arrested and prosecuted by the commission.

“We have taken over Ishaq Abubakar who is in possession of 2,886 ATM cards concealed in a carton of noddle together with four SIM cards. It is for us here to investigate and know whether the conspiracy is for foreign exchange malpractices or money laundering.

“We are also to determine whether banks or bankers are involved in this crime. We will investigate and anyone found wanting will be prosecuted alongside the suspect,” the EFCC Zonal Head stated.

“That the ATM cards are of different banks is another conspiracy and that raised a lot of questions that needed to be unravelled.”

Bawa also raised the fresh alarm of Nigerians selling their bank accounts to fraudsters saying that has been the latest trend in the last couple of years.

His words, “In the last couple of years, we noticed a new trend whereby Nigerians are selling off their bank accounts to fraudsters. The fraudsters advise them to open bank accounts and they buy them off for as low as N10,000.

“Nigerians should know that anyone buying off their bank accounts is using it for fraudulent transactions and banks also needed to be investigated because that means they aren’t carrying out due diligence such as Know Your Customers (KYC) on respective bank customers.”

QUESTIONS TV Series on course for 2021 debut as casting begins