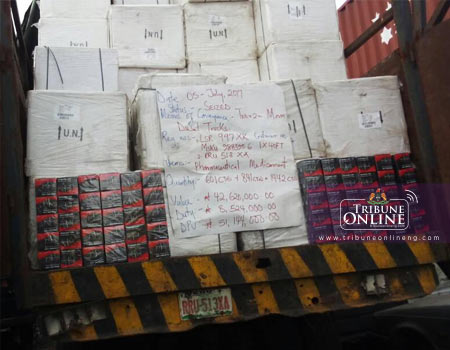 Analgin Injection was banned in the country 15 years ago when it was discovered that it could lead to complications that increase the risk of heart problems.

The Controller of the Command, Mr Ahmad Nasir disclosed this on Thursday while briefing newsmen on the arrest of suspected smugglers of drugs and other banned products in Kano.

According to Nasir, the command would never allow such activity, which posed a great risk to citizens’ health and was capable of denting Nigeria’s image, to go on without being stopped.

“And also, if such illegal importation of banned and illicit drugs continues in the country, the fight against any form of security challenges cannot be achieved.

“Therefore, it is also our responsibility to contribute to the fight against drug abuse in Nigeria, and such requires everyone’s support,’’ he said.

Nasir advised travellers to watch their bags and belongings, so as not to fall victims of a set-up by some criminal elements.

In the same vein, the controller also said the command had, in less than two months, seized illegally imported rice and vehicles worth more than N266 million.

Mohammed said the drugs were also said to have been donated by the agencies.

Mohammed said that the drugs intercepted included a brand of Vitamin B complex injection which had also been banned in the country.