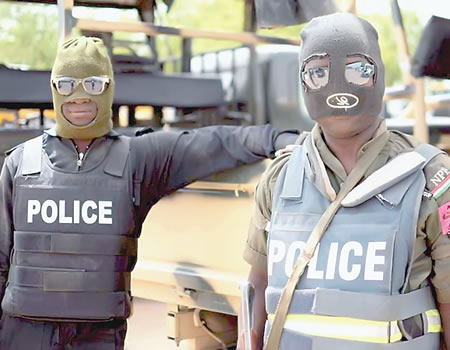 The Coalition of United Political Parties (CUPP), has lent its voice to the growing calls to end operations of the Special Anti-Robbery Squad of the Nigerian Police (SARS), calling on the President Muhammadu Buhari- led government to immediately scrap the body as well as embark on comprehensive Police reforms that would guarantee the safety of citizens and their fundamental human rights from what it termed police terrorism.

CUPP made these demands on Monday in a release issued and signed by its National Co-Spokesperson, Comrade Mark Adebayo, saying the demand became imperative as this was not the first time SARS and other special police squads were being ordered to stop patrolling and desist from invading the privacy of citizens through unlawful checking of their phones and laptops but had desisted.

CUPP, while stating that SARS had outlived its usefulness if at all it had any, said it was not only disturbing but utterly disheartening hearing of the daily murderous escapades of the SARS operatives who had rendered Nigerian youths endangered species in their own country.

“What Nigerians want is the immediate and total scrapping of SARS and comprehensive Police reforms that will guarantee the safety of citizens from police terrorism and respect for the fundamental human rights of Nigerians and not the ephemeral, cosmetic approach to the epidemic of police brutality against Nigerians.

“These are the same operatives who have failed woefully to tackle armed robbery, kidnapping, killer herdsmen, rape, terrorism and allied criminalities but are always eager to unleash terror on innocent Nigerians they are paid to protect. This is totally unacceptable and we condemn it unequivocally.

“We join all Nigerians to call on the presidency to intervene directly and scrap SARS totally because it is clearly evident that the Nigeria Police institution lacks the capacity to self-regulate to serve Nigerians satisfactorily.

“Nigeria is not a totalitarian state where its police and other security agencies can terrorise citizens clandestinely. We state without mincing words that SARS has outlived its usefulness if at all it had any,” CUPP said.

Speaking further, the coalition recalled that operatives of SARS had, for too long, constituted themselves unto lawless groups who engaged in the summary execution of mostly innocent Nigerian youths, heavily extorted them, illegally and routinely detained them with no just cause.

It said that allegations and video evidence against the SARS personnel for decades, including rape and other heinous acts of criminality, suggest they were not different from a terrorist organisation and criminal gangs in police uniform by whose actions hundreds of promising Nigerian youths had needlessly lost their lives.

“It is worrisome and baffling how police and government authorities have allowed the criminal activities of the SARS to go on unchecked for so long while ignoring the daily outcries of the youths and concerned parents,” the coalition said.

“These are the same operatives who have failed woefully to tackle armed robbery, kidnapping, killer herdsmen, rape, terrorism and allied criminalities but are always eager to unleash terror on innocent Nigerians they are paid to protect. This is totally unacceptable and we condemn it unequivocally,” it noted.

CUPP, while insisting that SARS had outlived its usefulness, urged the Nigerian youths and all Nigerians not to stop the #ENDSARS campaign until SARS is scrapped, even as it demanded a Judicial Commission of Inquiry to fully investigate the activities of the body in the last 20 years.

According to the coalition, this should be done with a view to getting justice for all of their victims and their families and ensure that all criminal SARS operatives are adequately punished for their crimes.

The coalition commiserated with the families of the victims of SARS terrorism, even as it urged them to come out and testify whenever the government decided to investigate activities of the organisation.