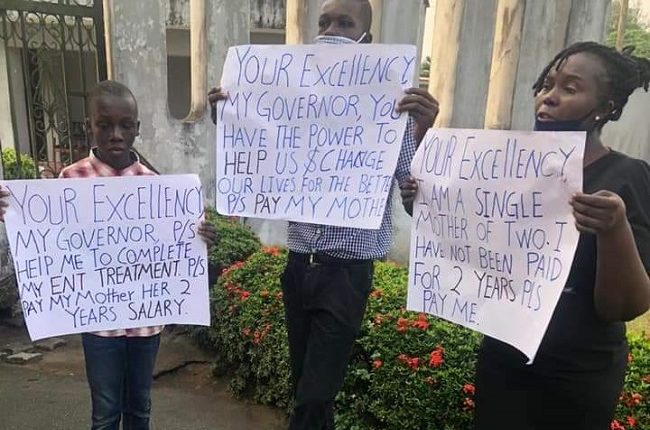 A magistrate in Odukpani, Cross River State, Safiya Iyeh Ashipu, has led two of her children to protest the non-payment of her salary for over two years by Governor Ben Ayade

Ashipu, a Chief Magistrate at the Odukpani jurisdiction, is among the 29 magistrates, whose salaries and emoluments were stopped by Governor Ben Ayade who has been having a running battle with the state judiciary for close to two years now.

One of such battles was the controversy which surrounded the replacement of the former chief judge of the state, Justice Michael Edem, who retired on November 29, 2019.

While Edem announced Justice Akon Ikpeme, the next in rank to him as the Acting Chief Judge, Governor Ayade rooted for Justice Maurice Eneji to replace Edem in contravention of the order of seniority in the state’s judiciary. Reason, however, prevailed and Ayade later swore in Justice Ikpeme.

The magistrate, a single mother of two, buckling under the crushing effects of the unfriendly economic situation in the country, led her children to protest at the Cross River State Government House, Calabar, in the early hours of Monday. 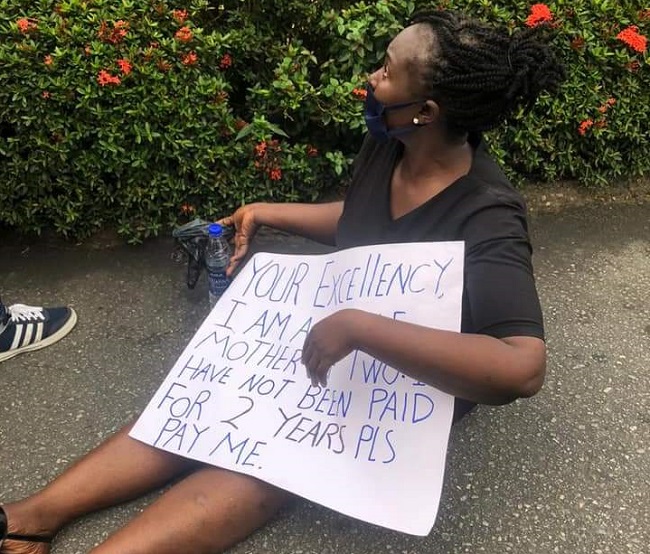 Magistrate Ashipu, in one of the photographs, sat on the bare tare of the Government House, holding a bottle of water.

Nigerian Tribune gathered that the single mother of two was accosted by some security personnel attached to Governor Ayade, who threatened and seized her phone. The security agents, as at press time, were making moves to get the magistrate and her children off the Governor’s Office.

When contacted, Mr Christian Ita, Special Adviser to Governor Ayade on Media said that the case of the magistrate was the issue of the irregularities in her employment and that of others.

“The process of engaging them was not followed through. Even if the governor gave the order that they should be employed, after employing them, you still have to go back to the governor to sign so that they can be enrolled on the payroll.

“That was not done. This was also the case with the 1,500 civil servants. The governor only signed their employment off and they started receiving their salaries from October last year. All she (Ashipu) needs to do is to go back to the Attorney-General of the state, find out which of the processes was left out and get that rectified and be on the state payroll.”