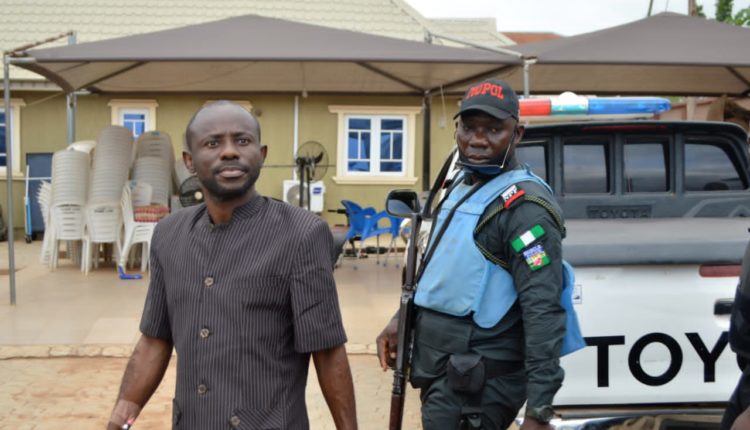 The owner of a company, Detorrid Heritage Investment Limited, Olaniyan Gbenga Amos, popularly known as Crime Alert, was on Monday arraigned by the Ibadan Zonal Command of the Economic and Financial Crimes Commission (EFCC) before Justice Uche Agomoh of the Federal High Court sitting in Ibadan, Oyo State, on a 35-count charge bordering on conspiracy, operating business of other financial institutions and obtaining money under false pretence to the tune of N35 million.

One of the counts had read: “That you Olaniyan Gbenga Amos and Detorrid Heritage Investment Limited between August, 2019 and May, 2021 at Ibadan, within the jurisdiction of this honourable court, without licence, operate business of other financial institutions and thereby committed an offence contrary to section 58(1) and punishable under section 59(6) (a and b) of the Banks and Other Financial Institutions Act, Cap B3 Laws of the Federation Nigeria, 2004.”

Count 20 also read: “That you Olaniyan Gbenga Amos and Detorrid Heritage Investment Limited on or about 29th of September, 2020, at Ibadan within the jurisdiction of this honourable court, with intent to defraud, obtained the sum of N15,000,000:00 (Fifteen Million Naira) only from Fadipe Babajide Ayorinde, when you falsely represented to him that the money is meant for registration and investment with Crime Alert Security Network, with a promise of 30% return on investment in 6 weeks (30 working days), which representation you knew to be false and thereby committed an offence contrary to section 1 (I)(a) and punishable under section (3) of the Advance Fee Fraud and Other Fraud Related Offences Act 2016.”

After pleading not guilty to the charges, the prosecution counsel, Galadanchi Sanusi, in view of the plea, asked the court to remand the defendant at the Nigerian Correctional Service and fix a date for trial to commence.

Counsel for the first and second defendants, Richard A. Ogunwole (SAN), however, informed the court he had filed an application for the release of his client on bail.

But the court ruled that the application was not ripe for hearing, as the further affidavit filed by the defendant was not properly before the court.

Justice Agomoh ordered that the defendant be remanded at the Nigerian Correctional Centre, Abolongo, Oyo town, and adjourned the matter till October 25 for a hearing of bail application.

Tribune Online learnt that the defendant was arrested following petitions by victims, alleging that Amos through his company, Detorrid Heritage Investment Nigeria Limited (DHIL), popularly known as Crime Alert Security Network Investment, induced them to invest in a network scheme that offered a monthly 30 per cent returns on investment.