Brands and Marketing
By Akin Adewakun |Lagos On Jun 22, 2020 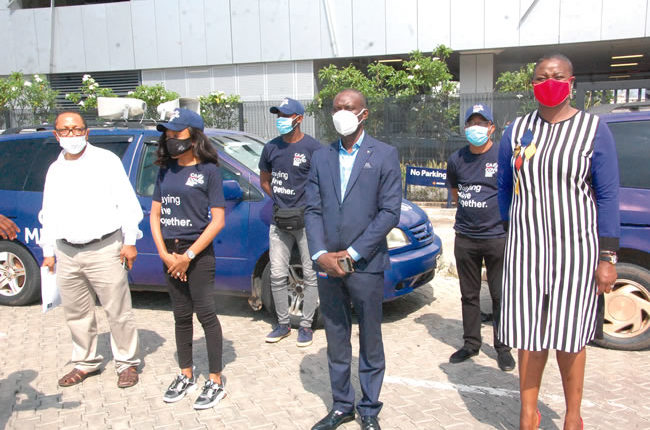 These are, undoubtedly, not the best of times for individual and corporate economies. The advent of the Corona virus pandemic, and its continued spread, has continued to take its toll on  businesses and nations’ economies.

But, more worrisome, for many, is the fact that  despite the continued rise in the number of people, infected  with the highly contagious pandemic, the skepticism  among some Nigerians, especially those in the rural areas, is still very huge. This, no doubt, constitutes a source of concern for many; since they believe such attitude and belief must change, for the  country to effectively overcome the rampaging pandemic.

Therefore, the decision of the Coalition Against Covid19 (CA-COVID),  a group of more than 50 private sector corporations in Nigeria, to initiate a grassroots awareness campaign to reach out and educate Nigerians,  especially those in the rural communities, on their personal responsibility to stay safe at this time of the pandemic, is no doubt seen by many as a welcome development.

With a clear mission to educate people in the rural areas, CACOVID recently flagged-off the pilot phase of the campaign in Lagos, Rivers and the Federal Capital Territory. The mandate was  to take the message of hand-washing, social distancing and wearing of face masks to the door steps of people in the rural and semi-urban communities, thereby complementing the efforts of both the federal and state governments at keeping Nigeria COVID-19 free.

From Ajah, to Ogombo, Oko-Oba, Makoko, Okooba/Abatoir, Aginliti, Isawo, Mosafejo/Amukoko, the team of campaigners, in Lagos, led by Arthur Chima, continues to traverse the length and breadth of the state, with a single and simple mission of engaging the grassroots.

The multidisciplinary team of about 20 professionals, armed with sound understanding of the disease and its spread along with instructional posters and banners, is only a small sub-team of the Coalition Against Covid19 (CACOVID).

A CACOVID-19 Communications Coordinator, Mr. Tony Chiejina had, at the flag-off of the awareness campaign, recently, explained that the sudden realization that the efforts of CACOVID team, in the past few months, had not fully resonated with the people at the grassroots,  actually informed the new  campaign.

According to him, the campaign is designed to directly engage and address every misconception about COVID-19 and its transmission.

“The realization that our communications efforts so far have not successfully reached our semi-urban and rural communities, triggered the CACOVID Grassroots Awareness and Mobilisation Campaign, to directly engage and address all of the misconceptions about COVID-19 and its transmission. It is to also encourage immediate adoption of safe personal hygiene practices,” he stated.

Since the flag-off in Lagos, Rivers and the FCT, the campaign train has made substantial gains as they continue to directly engage with the people. In most of the communities visited, the teams were able to put out the right information to correct misinformation and fake beliefs that hot alcoholic drinks could cure the disease.

Jimoh Ifafiyebi, a driver in Ifako area of Lagos metropolis, said though he was yet to come across anyone infected with the disease, he however believed the virus was real.

He also commended CACOVID for the grassroots awareness, adding that the campaign would go a long way in convincing some people to take responsibility, while also confirming the fact  that the virus actually existed.

While commending the CACOVID Team for the initiative, Chief Akerele noted that such campaign had become imperative, especially for the nation’s senior citizens, mothers, aunties and all caregivers, who might not have access to quality information from other sources.

“This kind of reminder is what we need at this time and we need it as often as possible,” the community leader stated.

As Arthur’s team buses moved through places where social distancing was hardly being observed, the obvious gains of the exercise could be observed. Many  who had only held their nose masks in their hands or pockets, were quick to bring them out and wear them appropriately.

The story is same across Rivers State and the FCT, as the campaign reached communities in Abuloma, Bundu, Agbonchia, Omarelu, Onne, Elele in Rivers State and Nyanya, Kutunku, Mpampe, Gwarinpa and Kubwa in the FCT.

Since its inauguration early this year, CACOVID, in partnership with the Presidential Taskforce on Covid-19, the Nigeria Centre for Disease Control (NCDC) the UN System and the World Health Organisation (WHO), has been in the forefront of uniting the organised private sector to execute initiatives aimed at combating community spread of the global pandemic in Nigeria.

Oshiomhole and the North