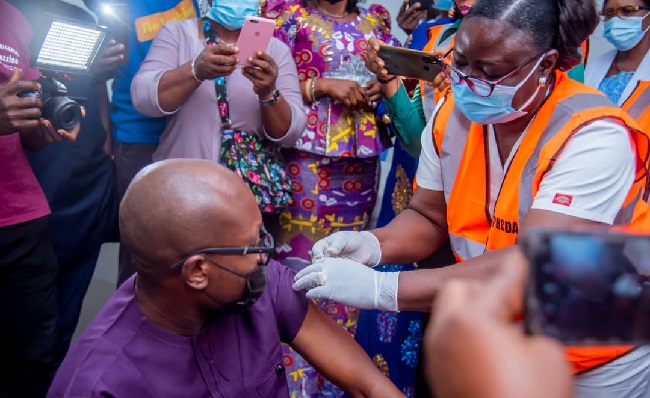 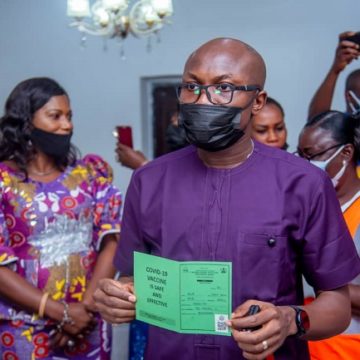 Vaccination against COVID-19 kicked off, on Friday in Warri as the chairman of Warri South-West Local Government Area, Dr Michael Tidi, took the first jab at the secretariat.

The Vice-Chairman of the council, Mrs Divine Iniovosa, the Majority Leader of the Warri South Legislative Arm, Hon Ijabo Sylvester, his Deputy, Hon Orits Iyekpeme, Warri South HPM, Dr Mrs Mine Igbrude, and others got theirs after the chairman.

Speaking before he was vaccinated, Tidi said that so far, the vaccine has been safe with no report of any adverse reactions from early recipients of the vaccine in Nigeria.

He, therefore, encouraged the people of Warri South to take the vaccine, noting that the more people were vaccinated, the more the immune system of the people would be boosted to fight the virus.

Tidi thanked the state governor, Senator Ifeanyi Okowa, for making the vaccine available to the people of Warri South.

He appealed to religious leaders in the local government area to encourage their followers to take the vaccine.

“This pandemic has, indeed, brought untold hardship to the country. We cannot but thank God Almighty for witnessing this day.

“I want to disabuse the minds of the people of Warri South Local Government Area from the conspiracy theory put out there about this Oxford/AstraZeneca COVID-19 vaccine.

“I also want to appeal to our religious leaders to be charitable with their choice of words and encourage their members to take advantage of this vaccine.

“The truth of the matter is this, if you are a believer of the Bible, and if you search the scriptures, you will know that this medical knowledge is derived from the scriptures.

“Science is encouraged by the Bible, so I see no reason why, because of your belief and our faith, we will be speaking against science.

“As one who is a scientist, I can say with all sense of humility and sincerity, that this is the way to go.

“This is the global direction. If our leader and governor, the cerebral Senator Ifeanyi Okowa, could lead by example by taking the vaccine together with the Speaker and other government functionaries, I see no reason why those of us who are being led by them should not follow suit.

“He (Okowa) is a successful medical doctor, he has taken the lead and all we needed to do was to follow suit. At this local level, we are also taking the lead. So I call on everybody to take advantage of this opportunity,” Tidi said.

Earlier the Executive Secretary of Health Department in Warri South, Dr Tosan Sagay, assured people of the council that the vaccine was safe to take as it works well with the African environment.

She said the first 2,400 jabs of the vaccine will be given to health workers, the military and the paramilitary.

Dr Sagay said the vaccine was intended to give people some level of immunity, stressing that the conspiracy theories going round in social media about the Oxford/AstraZeneca COVID-19 vaccine, were not true.

She said that out of the over 20 million people that had received the Oxford/AstraZeneca COVID-19 vaccine, only 37 had shown traces of blood cloth.

“It was also discovered that the vaccine has minimal side effects. So it is safer to take it than not to take it at all,” Dr Sagay noted.