Latest NewsCoronavirus
By Tribune Online On May 16, 2020 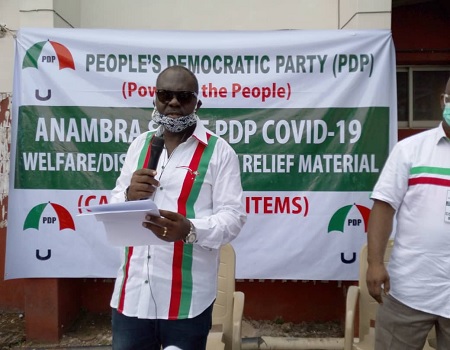 The People Democratic Party (PDP), Anambra chapter, has announced a donation of N120 million post-COVID-19 lockdown palliative to the people of the state.

Chief Ndubuisi Nwobu, the state PDP Chairman, announced the donation at a news conference in Akwa on Saturday.

Nwobu also inaugurated a nine-man Anambra PDP COvID-19 Welfare Committee headed by Mrs Chidi Onyemelukwe, the deputy governorship candidate of the party in the 2017 election in the state.

He said that the intervention was to complement the efforts of the federal and Anambra governments towards cushioning the effects of the novel coronavirus pandemic on the people of the state.

The chairman lauded the efforts of health workers who had been in the forefront in the fight against the pandemic and commiserated with families who had lost their loved ones.

Nwobu appreciated members of the Board of Trustees of the party who contributed the money, including Chief Peter Obi, who donated N40 million, PDP members of Senate, House of Representatives and Anambra House of Assembly among other benefactors.

On modalities for sharing the palliatives, Onyemelukwe said that the party intends to enhance the state’s capacity to fight the virus by setting up a COVID-19 test centre in the next 21 days whenever the government makes a space available to the party.

The Welfare Committee Chairperson, Mrs Chidi Onyemelukwe, announced that N300,000 would be shared to every community in the state with the view to support the less privileged and most vulnerable.

According to her, 60 persons/families will be supported with the sum of N5,000 each to feed or build their businesses.

She said the committee, which already had N125 million in its kitty, would use N12 million for the three health institutions and two isolation centres in the state with medical equipment.

The welfare committee chairman said that wards in the health facilities would get N105,000 worth of food items and cash.

She explained that the palliatives would be distributed devoid of political consideration, favouritism, discrimination, adding that the donation will be done for the sake of humanity.