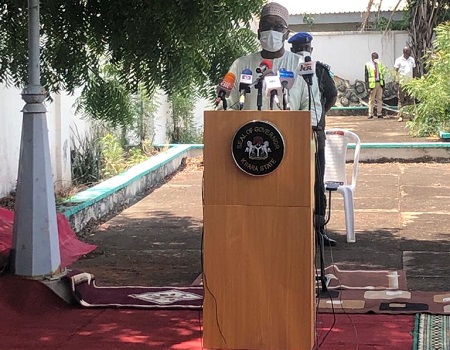 Governor Abdulrahman Abdulrazaq of Kwara State has reacted to a viral video against alleged poor palliatives meant to ease sufferings of some people observing stay at home directives, saying the state government cannot feed everybody.

Speaking with journalists in Ilorin, on Tuesday, Governor Abdulrazaq said that the online video was politically motivated.

It is recalled that a video that was released on social media on Monday by some residents of Asa local government area of the state went viral, showing alleged insufficient food items being distributed to the people of the area.

The governor, who said that the present time is not for partisan politics, added that the video had been traced to people in the opposing political parties.

“From the footage, you see that nobody showed their faces. It was politically motivated. We traced down people who did to the opposition party. This is not the time for partisan politics. You noticed that this thing is not limited to Kwara. The same thing also manifested in Kaduna, Lagos and other states. So, we want to ask people to behave themselves because all hands must be on deck to get to the roots of this pandemic and get it resolved.

“Like the chairman of the palliatives committee, His Royal Highness said, it (the palliatives) is not meant for everybody in the society. The government cannot feed everybody. That’s why we’ve left the market open, civil servants are getting their salary. Markets are open, so is the pharmacy. You can get there and buy things. To get a bag of 50kilogramme rice for every Kwaran would cost us about N60 billion. There are certain categories of people entitled to these palliatives. Not everyone in all the wards should share it, including civil servants, No. There’s a distinction.

“The Federal Government rolled out its palliatives yesterday in the state, which gave N20,000 to 25,000 people. You can see that it is not all Kwarans that benefitted. Not everyone will benefit. So, I urge everyone to ignore politically motivated videos online. Let’s be proactive, let’s be our brother’s keeper.

Also speaking in the same vein, the chairman of the palliatives committee, who is also the Emir of Shonga, Dr Haliru Yahaya, said that “As far as we’re concerned, nobody who’s qualified had less than a bag of the items given. Everyone concerned, as picked by the committee, deserves one bag of the item. It’s sad to share the content in the bag of rice and start to be making a video out of it.”