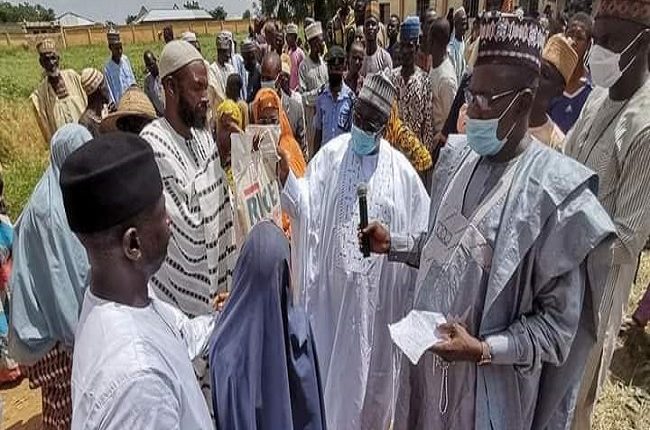 Sokoto State Government has debunked some media report on the ongoing distribution of COVID-19 palliatives by the officials of the state government.

According to a press statement signed by the special adviser on public affairs to the governor, Mallam Abu Shekara, he denied the report in its entirety and explained that those behind it are mere casting aspersions to discredit the image of the state government.

A recent report carried in some media is claiming that Sokoto State has begun the distribution of COVID-19 palliatives allegedly to avoid the looting of the items being experienced in some states.

“The story is false and misleading and deliberate mischief, aimed at disparaging Sokoto as a state and casting aspersions on the image of the State Government, obviously at the bidding of unscrupulous politicians.

“Contrary to the blatant lie contained in that story, reports were widely carried by conventional and online media in early October chronicling the distribution of CaCOVID- 19 palliatives in Sokoto State. The exercise was carried out by a State’s Committee, headed by the Secretary to the State Government Malam Sa’idu Umar in all local governments of the state.

“The distribution of the CaCOVID- 19 relief items to beneficiaries in Sokoto State was covered by all the local, national and international media represented in state, including online publications.

“As for the Federal Government COVID- 19 palliatives, the process of receipt of the materials by Sokoto State and distribution of the items to beneficiaries is transparent and as prompt as the protocol has permitted.

“The Minister for Humanitarian Affairs, Disaster Management and Social Development, Hajiya Sadiya Umar Farouk came to Sokoto State on 16th October 2020 and handed over the Federal Government COVID-19 palliatives to Sokoto State Government. The Minister’s visit and handover of the materials is required to kickstart the distribution to beneficiaries.

“The transportation of the relief materials known as Federal Government COVID-19 Palliatives to various LGAs of the state began on the 18th and ended on 23rd, October 2020.

” On Friday 24th October, the SEMA staff in partnership with staff from ICPC, Code of Conduct Bureau (CCB) and DSS commenced the supervision of the distribution of the relief materials to the intended beneficiaries, starting with Isa, Sabon-Birni and Gada LGAs of Sokoto State.

“On Saturday 15th, October; the team visited Goronyo Wurno and Rabah for the continuation of their joint supervision activities.

“The supervision will continue in the coming week starting with Tureta, Dange-Shuni and Yabo Local Governments”.

The statement, however, warned any prospective sponsored hoodlums who may plan to loot COVID-19 palliatives in Sokoto State, to get ready to travel to all the 23 local governments in the state and dare the wrath of the beneficiaries.

“But as the world can witness, Sokoto State has remained calm and peaceful, throughout the mayhem resulting from anti-SARS protests in parts of the country.

” If the report is part of a calculated attempt to incite the type of chaos happening in other states in Sokoto, it’s sponsors should know that it is an effort in futility. The people of Sokoto State are in tune with their government regarding the current situation in Nigeria and they stand for peace and order.

“Publications, that bandy such fake news ought to be ashamed of themselves for abandoning the pursuit of societal wellbeing, which is the cardinal principle of media practice and instead, lending themselves to the mischief of negative forces, who thrive on crises and disorder” he added.

Equities investors gain N42.3bn as index appreciates by 0.3 per cent