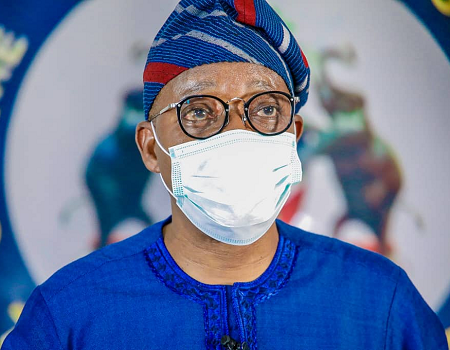 Governor Adegboyega Oyetola of the State of Osun has ordered the total lockdown of four of the local government areas of the state namely: Ilesa East, Ilesa West, Atakumosa East and Atakumosa West for seven days in the first instance.

The decision was the fallout of the meeting between the government and the stakeholders from the area.

The lockdown is expected to commence on Tuesday, July 7, and it will be for one week in the first instance. However, if the compliance level is not encouraging, the government will announce the further extension.

The state also said it was closely monitoring other Local Government areas with rising numbers of those testing positive for COVID-19 and may in the days ahead lock down more areas.

However, the relaxation in other areas of the state has been extended by two weeks.

These were contained in a statement issued by the State’s Commissioner for Information and Civic Orientation, Mrs Funke Egbemode.

She further said the decision to impose a total lockdown on the four local government areas was aimed at containing the spread of the virus in that axis of the State, noting that government had every reason to believe that it was already witnessing what looked more like a community transmission in the area and as such there was a need to come up with measures to arrest the trend.

The Commissioner stressed that the lockdown would be total. Residents and citizens in that axis will not have the opportunity to go to worship centres and markets during the period. They will only be allowed to shop within their neighbourhood.

Under the lockdown, there would be no vehicular movement within the affected areas. Only those on essential duties such as health, fire service, environmental officials, security personnel, power and water supply agencies, media and telecommunication officers will be allowed to move.

Mrs Egbemode also revealed that intra-state travel to and within the affected communities and to other parts of the State is banned during the period of the lockdown, warning that violators of the lockdown order will be severely dealt with.

“As you are all aware, the Federal Government, a few days ago lifted the ban on interstate travel in the country. We have, therefore, lifted ours too. But our relaxation guidelines still subsist except for four local government areas, namely; Ilesa West, Ilesa East, Atakumosa West and Atakumosa East Local Government areas where we have now ordered a one-week lockdown, effective Tuesday, July 7.

“For the avoidance of doubt, our curfew will still run from 9.p.m to 5.a.m daily in other parts of the State, except the locked down LGAs.

“In furtherance to the above, for the other parts of the State, the ban on political, public, religious, and any kind of gatherings under whatever guise remain in force, while worship centres must adhere strictly to government’s guidelines guiding their re-opening. The government will not hesitate to shut down any of the worship centres that violate our guidelines.

“For the four local government areas, all markets will remain shut, only neighbourhood markets and Pharmacies will be allowed to open. There must be strict adherence to stipulated physical distancing, the use of face masks, and observance of all other precautionary measures and established protocols of the Nigeria Centre for Disease Control (NCDC).

“To this end, we urge citizens and residents of the affected communities to take advantage of the hours between now and Monday to stock up provisions that will last them one week in the first instance.

“We have mandated and mobilised the state’s task force and security operatives to strictly enforce the measures.

“The decision to shut down a part of the state, though painful, is the only way to go if it must arrest the further spread of the virus in the state,” she added.