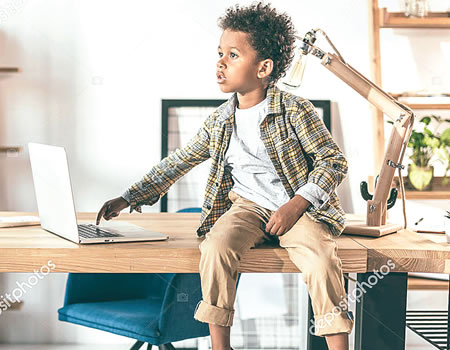 Children participating in classes online are a helpful situation for parents to deal with the COVID-19 lockdown.  In this report by SADE OGUNTOLA, experts caution on its mental health implication for children and adolescents.

In the wake of the Coronavirus pandemic, which has led to the closure of schools across the country,  many private schools and the government adopted e-learning to enable students to continue with studies while at home.

State governments of Oyo, Ogun and Lagos among others ,to get public and private school students to be fully engaged while at home, developed daily lesson programmes to use multiple media, including radio, television and the internet to reach the students in secondary and primary schools.

Giving children alternative ways to learn and also rebuilding a routine is a critical part of our response has come with many concerns.

Hence, it is not surprising to see how the scenario is currently playing out in many families and homes from schools charging for the online classes and fuelling generators aside existing tuition fees; increased cyber bullying, internet addiction, overreliance on the internet and poor writing among students.

Some concerns are also health-related, eyesight problem, back  pain, cliques, sexual experimentation and embarrassments and disappointments which could result in mental health problems like anxiety and depression. Some of these problems are regardless of overall time spent on social media.

He stated that allowing young children, some below 8- year-old, access to the internet even for online classes, leave them vulnerable to all sorts of information and characters, including predators.

Children may see it as exciting, something new, freedom at last to explore just any information, even if false, join groups on different platforms, create a completely different personality for them and divulge personal information and pictures make them vulnerable to predators.

Dr Abdulmalik said there had been instances that predators had blackmailed young people, including children to do things they knew to be wrong because of threat to post obscene pictures for the whole world to see or report to their parents or school.

“By the time they start blackmailing them; this could cause a lot of emotional challenges. Some would become very anxious; depressed or become addicted to social media. If they do not go on the social media for one hour, they will be worried that somebody who has liked or made a comment on their post,” he stated.

Nonetheless, he declared that students, who attempt to multi-task by checking social media sites while studying, show reduced academic performance. Their ability to concentrate on the task at hand is significantly reduced by the distractions that come with the use of social media.

Dr Abdulmalik said that prior to the lockdown to curtail community spread of COVID-19, internet addiction or social media addiction had become an increasing problem that mental health professionals had to deal with globally.

According to him, “it was already becoming a problem and now it would  be worsened by the lockdown and not having other exposure to human beings, to normal classes, to exercises since now everything is online. “

However, he pointed out that internet addiction may cause an increase in depression as well as suicidal behaviours.

“Some three years ago in South Korea, a 12-year-old girl based on comments on her post on the social media committed suicide.  People were commenting and she did not give information that she wanted to know if she should commit suicide.

“So there are all sorts of issues that are online that if a child is not matured, they may not be able to know the left from the right.”

According to recent studies, social media platforms like Instagram have increased the number of cases of social anxiety disorders in teenagers and adolescents.

Multiple studies have found a strong link between heavy social media and an increase in the risk for depression, anxiety, loneliness, self-harm, and even suicidal thoughts.  It has also promote negative experiences such as inadequacy about life or appearance.

Some of the symptoms of a social anxiety disorder include a lack of desire to socialise, being withdrawn, feeling embarrassed or a deep fear of social scrutiny, and nervous habits like fidgeting and hair twirling.

Ordinarily many parents are not comfortable to give their children internet access because even when they assume that they should be in class, they may actually be browsing other things. And that is the danger.

He said it is wrong for schools to ask that children should open a personal account but rather ask that they use their parents account on the internet to log in themselves.

Dr Abulmalik said the essence of primary education is basically to learn to read and write but only start to learning the basics of a subject in secondary school.

“So we shouldn’t put too much pressure on very young children. I have seen on Facebook where some parents were complaining that their 3-year-old children were being asked to be do online class. That is an age that children should be left to play.”

Howard Taylor, Executive Director of the Global Partnership to End Violence against Children, said although families are  now relying on technology and digital solutions to keep children learning, entertained and connected to the outside world, not all children have the necessary knowledge, skills and resources to keep themselves safe online.

UNICEF maintained that a lack of face-to-face contact with friends and partners may lead to heightened risk-taking, such as sending sexualised images.

At the same time, increased and unstructured time online may also expose children to potentially harmful content as well as a greater risk of cyberbullying.

Henrietta Fore, Executive Director of the UN Children’s Fund (UNICEF), declared “Under the shadow of COVID-19, the lives of millions of children have temporarily shrunk to just their homes and their screens. We must help them navigate this new reality.”

Parental supervision is as valuable online as it is offline in instilling values and safeguards. Parents should check in regularly with their children to ensure that their online behaviour is appropriate.

Parents much more than before should talk about appropriate media use early and build a relationship of trust surrounding social media. This way, when there are problems they will be more likely to talk speak out.

In addition aside parents ensuring children’s devices, have the latest software updates and antivirus programmes, there is also the need to be alert to signs of distress in children that may emerge in connection with their online activity, and be familiar with school district policies and local reporting mechanisms and have access to numbers of support helplines and hotline handy.

COVID-19: Why children playing football in open field is unsafe