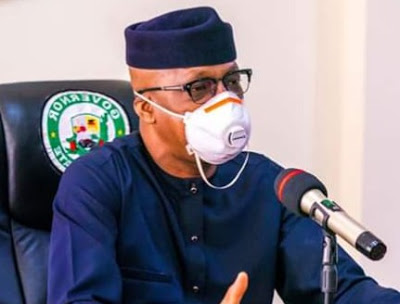 The Ogun State Government on Friday announced the suspension of re-opening of religious centres in view of the increase in a number of positive cases of COVID-19.

Abiodun, however, added that 315 patients have been treated and discharged out of 586 positive cases with 16 fatalities recorded.

He submitted that the government would continue to review the situation, engagement with stakeholders in containing the virus.

The governor noted that community transmission is on the increase, despite the effort of government in creating awareness on the danger posed by the virus.

He said, ” In my last briefing, we were considering a tentative date of Friday, 19th June 2020 to further ease the restrictions and allow the gradual opening of places of worship on Fridays and Sundays. Towards this end, we have had robust engagements with the religious leaders – Christian Association of Nigeria and the League of Imams and Alfas.

” I must thank them for their forthrightness, cooperation and even appreciation that the curve of the spread of the pandemic is worsening and that places of worship represent most potent fertile grounds for the spread of the deadly virus.

“As a responsible Administration, we choose life and the wellbeing of our citizens and are therefore constrained to take the painful but necessary decision to maintain the current regime of eased lockdown in the meantime.

“We are consequently suspending our initially slated reopening of places of worship. The challenge posed by the deadly COVID-19 pandemic is multi-faceted. Apart from the generally known facts that there are no vaccine or cure yet, the trajectory of the spread of the virus is also a moving target, despite the best efforts at arresting the spread of this highly infectious and deadly enemy.”