Latest NewsCoronavirusTop News
By Tribune Online On May 22, 2020 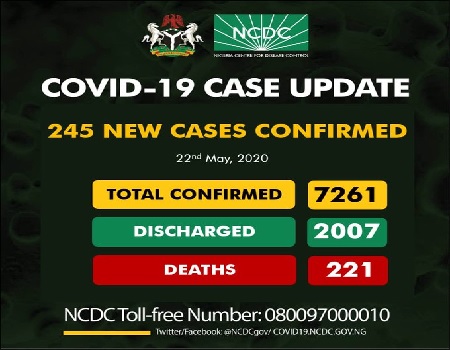 The Nigeria Centre for Disease Control (NCDC) has announced 245 new confirmed cases of coronavirus in the country.

This brings the total number of confirmed COVID-19 cases in the country to 7,261, Tribune Online reports.

The NCDC made this known via its Twitter handle on Friday. it also said that 131 of the new infections were recorded in Lagos.

FG Declares Monday, Tuesday Public Holidays To Eidul-Fitr Celebration
THE Federal Government has declared Monday, May 25 and Tuesday, May 26, 2020, as public holidays to mark this year’s Eidul-Fitr Celebration. Tribune Online reports that the Minister of Interior, Ogbeni Rauf Aregbesola, made the declaration on behalf of the Federal Government in a statement made available to… Read full story

Why I did special songs on COVID-19 — Ebenezer Obey