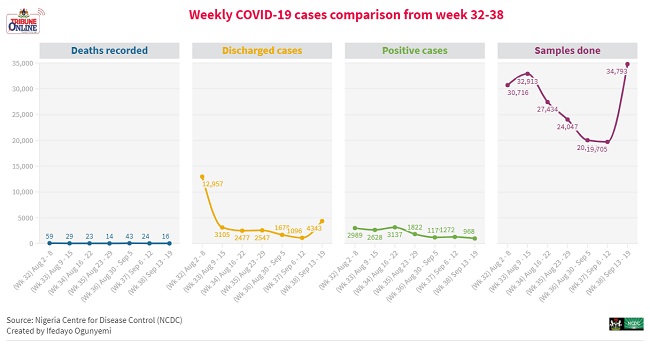 Last week marked the 38th week of the pandemic in Nigeria. However, while a total of 968 new infections were recorded last week, Nigeria recorded 1,272 new cases in the previous week (September 6 – 12).

The low cases recorded last week are not connected to the number of samples tested.

For four weeks, the number of tests conducted in Nigeria reduced, despite the nation’s capacity to test 15,000 samples daily.

Data from the Nigeria Centre for Disease Control (NCDC) showed that 34,793 samples were tested compared to the 19,705 samples tested the previous week.

The Presidential Task Force (PTF) on the COVID-19 pandemic, during last Thursday’s briefing, affirmed that the curve of the virus infection in the country has started to flatten.

The chairman, Boss Mustapha, said: “Looking back at our National Response, using science, data and experience from other countries, we cannot but say that tremendous progress has been made and that we are beginning to flatten the COVID-19 curve.”

The PTF further advised that the success should be approached with vigilance, saying that the reopening of international flights and other parts of economic activities could endanger the success so far gained as being careless could lead to a second wave of the disease.

Tribune Online reports that the number of people who recovered from the virus and were discharged increased last week and the highest the country recorded in over four weeks.

Also, 16 persons died of COVID-19 complications, a decrease when compared with the 24 deaths of the previous week.

On Sunday, 79 new cases of COVID-19 were reported in the country, bringing the total number of confirmed cases to 56,256.

On Monday, 132 new cases of the pandemic were reported in the country, taking the total to 56,388.

On Tuesday, 90 new cases of COVID-19 were recorded, bringing the tally of confirmed cases to 56,478.

On Wednesday, 126 new cases of COVID-19 were reported in the country.

On Thursday, 131 new cases were reported in Nigeria.

On Friday, 221 new cases of the pandemic were recorded.

On Saturday, 189 new cases were reported in Nigeria, bringing the total number of confirmed cases to 57,145.