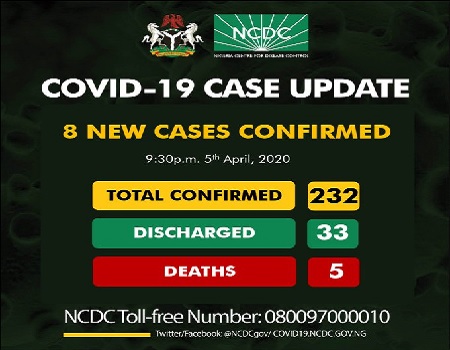 Eight new cases of COVID-19 have been reported in Nigeria: 5 in Lagos, 2 in the FCT and 1 in Kaduna State.

Thirty-three have been discharged with five deaths.

Eight new cases of #COVID19 have been reported in Nigeria: 5 in Lagos, 2 in the FCT and 1 in Kaduna State

As at 09:30 pm 5th April there are 232 confirmed cases of #COVID19 reported in Nigeria. Thirty-three have been discharged with five deaths pic.twitter.com/jnWgSFGTUh