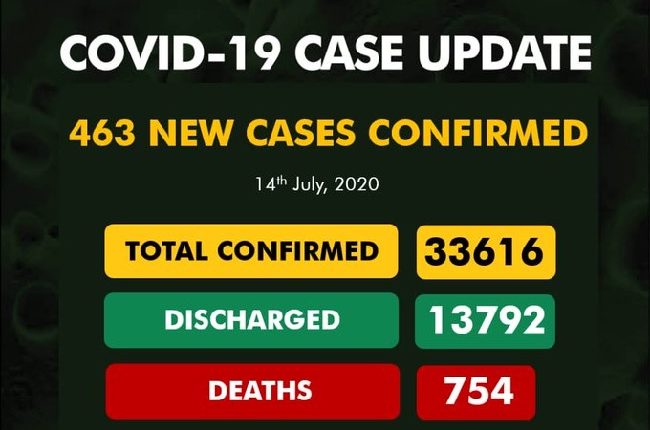 The Nigeria Centre for Disease Control (NCDC), on Tuesday, announced that the country has recorded 463 new cases of Coronavirus (COVID-19), bringing the total number of infections in Nigeria to 33,616.

The NCDC disclosed this on its verified Twitter handle on Tuesday night.

All Nigerians Should Get Tested For COVID-19  – PTF
The Presidential Task Force on COVID-19 has recommended testing of all Nigerians as a way to track the prevalence of coronavirus infection and understand how to tackle it… Read Full Story
Staff Retrenchment: NDDC IMC Snubs Senate Panel
The cold war between the Interim Management Committee (IMC) of the Niger Delta Development Commission (NDDC) and the Senate Committee on Niger Delta Affairs took a new twist on Monday as the management of the Federal government intervention agency declined appearance before the latter… Read Full Story
We’ll Rid Oyo State Of ‘One Million Boys,’ Other Nuisances ? Operation Burst DG
He said a sporadic shootout with the One Million Boys gang occurred when men of Operation Burst moved in to rescue the victim who was kidnapped by the gang and kept in an abandoned building in the area… Read Full Story
75 Groups Condemn NBMA’s Plan To Release Genetically Engineered Mosquitoes In Nigeria
Over 75 concerned civil society organisations and environment groups in Nigeria and outside have condemned the plans to introduce Genetically Modified mosquitoes into Nigeria… Read Full Story
COVID-19: Osun Govt Eases Lockdown In 4 LGAs
The Osun government has approved easing of lockdown imposed on four local government areas in the state to contain the spread of coronavirus… Read Full Story
It’s Premature To Reopen Schools —ASUP
The Academic Staff Union of Polytechnics (ASUP) has warned against the plan by some state governments to reopen schools, saying that any attempt at reopening schools at any level within this period is premature… Read Full Story