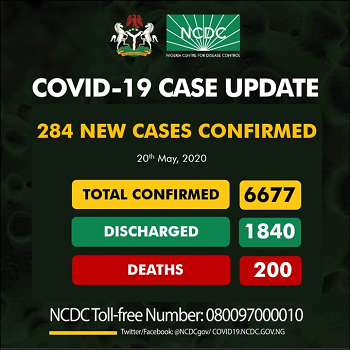 Nigeria Centre for Disease Control (NCDC), on Wednesday, has announced 284 more new cases of coronavirus  (COVID-19), making the number of confirmed cases in Nigeria rise to 6677.

The NCDC made this known via its verified Twitter handle on Wednesday night.

The centre also claimed that eight cases were, on 18th of May, erroneously announced for Zamfara.

“On the 18th of May, 8 new cases in Zamfara were erroneously announced

“Therefore, as at the 20th of May 2020, Zamfara has recorded a total of 76 confirmed cases

“We apologise to @Zamfara_state for this error and reiterate our commitment to accurate & transparent reporting of data.”

On the 18th of May, 8 new cases in Zamfara were erroneously announced

Therefore, as at the 20th of May 2020, Zamfara has recorded a total of 76 confirmed cases

We apologise to @Zamfara_state for this error and reiterate our commitment to accurate & transparent reporting of data pic.twitter.com/RIeUhZ2e0a