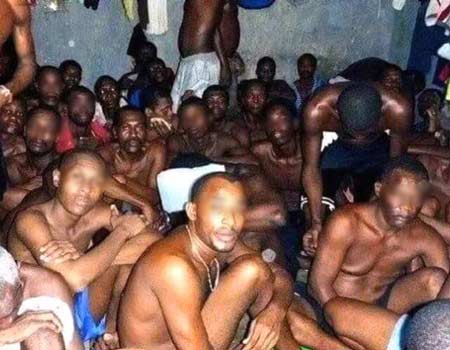 As a measure to check the spread of COVID-19, state Governors in the country have been called upon to as a matter of necessity prevail on the Comptrollers of Correctional Centres in their various states and the FCT to exercise their powers of the prerogative of mercy under the Correctional Service Act 2019, section 12 (8) to decongest the centres and save the inmates.

The call was made by a Non-Governmental Organization (NGO), Prison Inmate Development Initiative (PIDI-Nigeria), with the recent directives by the Federal Government that state governments should release 70 per cent of all awaiting trial inmates under the custody of Correctional Centres in their various states.

Executive Director of the NGO, Mr Mbami Iliya Sabka stated this while reacting to the decision of the Federal Government which he described as a welcome development, noting that reports indicated that the awaiting trial inmates account for 70 per cent of the detainees in Nigeria’s Correctional Centres.

He said that “Following the directive, PIDI-Nigeria is compelled to call on all state Controllers of Nigeria Correctional Centres to exercise their powers as enshrined in the correctional act, section 12 (8) to decongest the facilities by notifying the State Attorney General (AG) to curtail any possibility of COVID-19 outbreak in such centres”,

The Executive Director also said that “It was also reported that Minister of Interior, Ogbeni Rauf Aregbesola who gave the directive on behalf of the President said the move is to prevent the ravaging coronavirus from spreading into the correctional centres”.

According to the rights group, “the law, in section 12(8) has already empowered the Comptroller of Correctional Service to reject additional inmates above the facility under their watch. So, we will be forced to seek redress in the court’s if the comptrollers who have been given the constitutional powers to do the needful fail to exercise such powers”.

According to the NGO, “for instance, proper audit had revealed that nearly, if not, more than half of Bauchi Correctional Center’s population ought not to be in prison in the first place and therefore, ought to be released”.

The Executive Director who said that about 75% of Bauchi Correctional facilities population are persons awaiting trial – for very Petty or minor offences or even no offence at all often ended up in prison after they were arbitrarily arrested and maliciously charged simply for being unable to pay their way out of Police custody, and remanded in prison.

Mbami Sabka said that “Some may have been granted bail by a Magistrate’s Court but others dont know what to do or are unable to fulfil their bail conditions, or can’t afford legal representation. Reports after reports every year by local and international organisations and governments revealed these facts, yet the problems persist”.

He pointed out that, “At this perilous times when humanity faces the threat of extermination by this novel virus that has created a public health crisis, the impact can be mitigated in Nigeria by decongesting our correctional centres (prisons)”.

PHOTOS: Lady Who Tested Positive For Coronavirus Discharged, Narrates Her Experience At Lagos Isolation Centre
A lady who tested positive for coronavirus has narrated her experience inside the isolation centre in Lagos after she was discharged and was given a clean bill of health on Monday, March 30. The lady, Oluwaseun Ayodeji Osowobi, who wrote of her experience on her twitter handle, @AyodejiOsowobi, said she contracted… Read full story

COVID-19: Buhari Appoints Osinbajo As Chairman, Economic Sustainability Committee
President Muhammadu Buhari has set up an Economic Sustainability Committee with Vice President Yemi Osinbajo as chairman. He has also okayed financial services providers to operate during the restriction on movements and activities that he imposed on Abuja, Lagos and Ogun States to curtail the spread of coronavirus… Read full story

COVID-19: Governor Makinde Tests Positive, Explains How He Got Infected •Says I remain in self-isolation •Oyo State releases index case after treatment
Oyo State Governor, Mr. Seyi Makinde on Monday confirmed he has tested positive to the rampaging coronavirus otherwise known as COVID-19. The governor who tweeted via his personal handle @seyiamakinde on Monday, said that he was asymptomatic and would remain in isolation... Read full story

Buhari Signs COVID-19 Regulation, 2020
President Muhammadu Buhari on Monday signed the COVID-19 Regulations, 2020, which declared COVID-19 an infectious disease. A statement issued by Femi Adesina, Special Adviser to the President (Media & Publicity) in Abuja explained that this is in the exercise of the powers conferred on the president by… Read full story

TRIBUNE EDITORIAL: Yet Another Loss From Boko Haram Ambush
LAST week, the military high command confirmed the attack on troops by Boko Haram terrorists which led to the death of 47 soldiers in Gorgi, Yobe State. Blaming the massacre on residents of the area, the Coordinator of the Directorate of Defence Media Operations (DDMO), Major-General John Enenche, stated that the slain… Read full article

OPINION: Of Coronavirus, Fake News And Charity
THE coronavirus, otherwise known as COVID-19, that started in Wuhan, China, late last year has spread to many countries of the world. Coronavirus cases have crossed 330,000, while more than 14,000 deaths have been reported across the world as Europe becomes the new omphalos of coronavirus… Read full article

Ondo Blast Victims: How We Escaped Death, Lost Properties
A loud explosion that shook houses in the wee hours of Saturday, and violently roused the people of Akure and its environs, left about 70 houses and vehicles badly damaged, while 13 people sustained injuries… Read full story

33-Year-Old Okeho General Hospital Becoming Economic Waste
The Okeho General Hospital in Kajola Local Government Area of Oyo State is one of the oldest in the state. It was designed to meet not only the primary but also the secondary health needs of people in Okeho town and environs. However, like most government hospitals across the country and despite the attention… Read full story

Why we are evacuating Americans from Nigeria – US Embassy