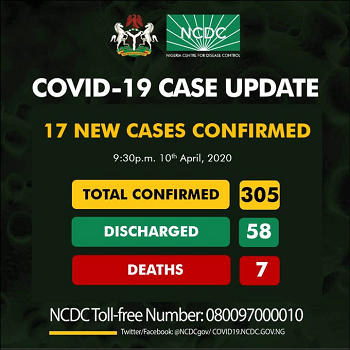 Nigeria Centre for Disease Control (NCDC), on Friday, has announced 17 more new cases of coronavirus  (COVID-19), making the number of confirmed cases in Nigeria rise to 305.

“Seventeen new cases of #COVID19 have been reported as follows: 8 in Lagos 3 in Katsina 2 in FCT 1 in Niger 1 in Kaduna 1 in Anambra 1 in Ondo,” NCDC tweeted.

“Three cases previously included as Lagos state cases have been transferred to Ogun state. The three cases live in satellite towns in Ogun close to Lagos.

Easter: Social Restriction Orders Still In Force ― IGP
The Inspector-General of Police, Mohammed Abubakar Adamu, on Thursday, declared that the social restriction order of the Federal Government to curtail the further spread of the deadly coronavirus pandemic in the country was still in force despite the Easter celebration festival by the Christian community… Read full story

COVID-19: I Saw Hell In Isolation ― Bauchi Gov, Bala Mohammed
After testing positive to COVID-19 infection and receiving treatment for about three weeks, Bauchi State governor, Sen Bala Mohammed Abdulkadir, has been discharged and given a clean bill of health by the Nigeria Center for Disease Control (NCDC)…. Read full story

COVID-19: Ensure Transparency In Management Of Fund, Lawan Tells PTF
President of the Senate, Ahmad Lawan, has advised the Presidential Task Force (PTF) on COVID-19 led by Secretary to the Government of the Federation, Boss Mustapha to ensure judicious use of fund dedicated to combat the pandemic… Read full story

COVID-19: Dabiri Urges Nigerians Thrown Out Of Chinese Hotels To Report To Embassy
Chairman and Chief Executive Officer (CEO) of Nigerians in Diaspora, Abike Dabiri-Erewa, has called on Nigerians thrown out of their hotels in Guangzhou China, to report themselves to the Nigerian Consulate in the Asian country for proper documentation and further actions… Read full story

COVID-19: FG Fails To Suspend Lockdown Policy As Christians Celebrate Easter
Federal Government on Thursday said it has no plan to suspend the lockdown policy as Christians throughout the Easter celebration scheduled to hold from Friday, April 10 to Monday, April 13, 2020… Read full story

Easter: Wike Relaxes Restrictions On Religious Gatherings
The Rivers State government has temporarily relaxed the restrictions on large religious gatherings to enable Christians to carry out their religious obligations during the Easter period… Read full story