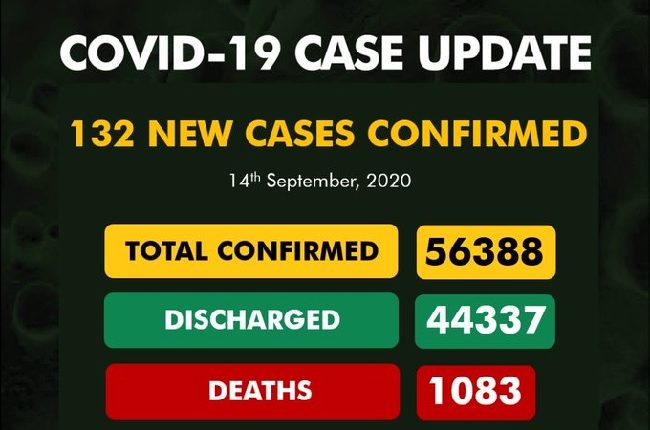 The Nigeria Centre for Disease Control (NCDC) has confirmed 132 new cases of COVID-19 in the country bringing the nation’s confirmed COVID-19 infection cases to 56,388.

The NCDC made this known via its verified Twitter handle @NCDCgov on Monday.

COVID-19: Not Yet Uhuru •Will Nigerians’ Indifference Spark Its Second Wave?
The spate of the deadly coronavirus pandemic surged from over three million cases in April to over twenty-six million cases in August. But while it is still increasing in some parts of the world, the infection rate, according to the figure released by authorities daily, is reducing in Nigeria…
Yoruba Summit Group Issues Red Alert On Nigeria
THE regular meeting of the Yoruba Summit Group has ended. It undertook an in-depth review the state of Nigeria in relation to the interests and aspirations of the Yoruba Nation…
Heed Obasanjo’s Warning Now, Leaders Tell Buhari
EMINENT leaders and elder statesmen from across the country have tasked President Muhammadu Buhari to heed the warning by former President Olusegun Obasanjo that the country is now more divided and nearing a failed state status, calling for urgent move to pull the country…
Crisis Rocks South-West PDP Again

FLICKERS: Obasanjo, The Failed State And Gangrene On Nigeria’s Foot
A few days ago when he provoked the failed state thesis, unbeknown to him, former President Olusegun Obasanjo was stirring up attention to the medical condition called gangrene. In its manifestations, gangrene bears similarities with the political condition of a failed state…
NCDC confirms 132 cases
After Two Years, Daddy Freeze Apologises To Bishop Oyedepo
Daddy Freeze whose real name is Ifedayo Olarinde has apologised to Bishop Oyedepo who is the presiding bishop and founder of Living Faith Church aka Winners Chapel…
NCDC confirms 132 cases