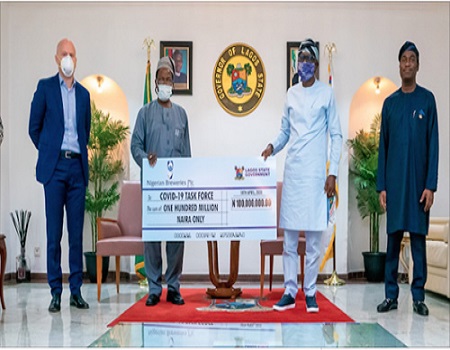 Nwabuzor said this in an interview with News Agency of Nigeria (NAN) in Awka on Thursday.

He said the company heeded the Federal and State Governments call for support to combat Coronavirus in the country and to give hope to Nigerians.

Nwabuzor said that as part of its CSR, the company would not relent in giving its support to the fight against the spread of the virus in various communities.

He said that the company had spent N600 million across the states and federal government to assist in combating the spread of the virus.

Nwabuzor said states like Enugu, Abia and Imo where its breweries were domiciled were given N20 million each, while other states got useful materials to aid in the fight against the virus.

“We have also procured useful materials as palliatives to all the states and are willing to do more to ensure that the fight against COVID-19 is a winning fight,” he said.

Nwabuzor said that COVID-19 kits and consumable items donated by the company were to aid the governments to improve health facilities in their states.

“The items donated included 150 trays of 33cl Maltina drinks, gallons of hand sanitiser and face masks amongst other items.

“We are certain that conscious distribution of these items would assuage hardship experienced by the people,” he said.

Nwabuzor said that the company would continue to partner with the governments in any way possible to succeed in the fight against the deadly virus.

Islam is not against childbirth spacing, Islamic cleric declares