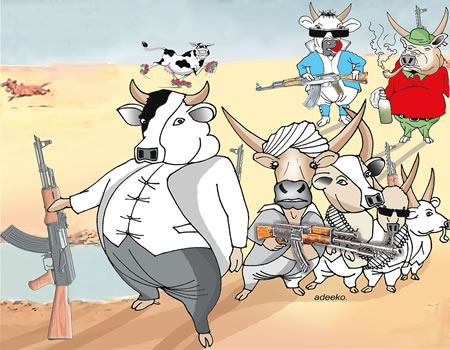 As the total lockdown imposed on Kabba-Bunu local government area by Kogi State government entered the second day as a result of alleged COVID-19 outbreak in the area, the Obaro of Kabba, Oba Solomon Owoniyi has vehemently appealed to the state government to relax the lockdown, saying within 24 hours farmers in the area have lost their farm produce to the activities of the herdsmen.

The royal father who made the appeal on Thursday at his residence in Kabba lamented that farming which is the source of livelihood of his people has been destroyed by herdsmen as people were lockdown at home.

According to him “We are appealing to Governor Yahaya Bello to reconsider the lockdown. All the protocol can be observed without total lockdown because within 24 hours of the lockdown the effect is already telling on my people who lived and dwelled on daily income.

“We can not survive the 14 days lockdown as 48 hours will be very devastating to us. The exercise should be given a human face in the interest of our innocent citizens who continually attested to the fact that there is no coronavirus in the local government.

While cautioning indigene of Kogi western senatorial district to be mindful of their utterances, the monarch warned against politicising issues that have a negative effect on the people.

“It is high time people should desist from politicising issues in the state. Governorship election has been conducted and won, this is the time to join hands with the winner to move Kogi state forward in the interest of development.

“The current administration in the state has no enemy in Kogi West and nobody has the mandate of the people to utter statements that are not in line with the peaceful coexistence of the entire district and we don’t want Kabba town to be used as a battleground to settle scores or political difference,” the royal father said.

He appealed to the state government to assist the people of Kabba with palliatives to cushion the effect of the lockdown.

Speaking, the Commissioner for Information and Communication Mr Kingsley Fanwo who led health workers and journalists to the palace of the monarch, said that the state government declared the total lockdown to enable it to conduct contact tracing of the alleged COVID-19 outbreak in the local government.

He added that the decision to lockdown Kabba and its environ was not aimed at inflicting hardship on the people, but to clear the insinuations made by some indigenes that there is COVID-19 in the town.

A resident of Kabba town who identified himself as Collins Aree told newsmen that the hardship caused by the lockdown was becoming unbearable, appealing to the governor to relax it before hunger kills the people.