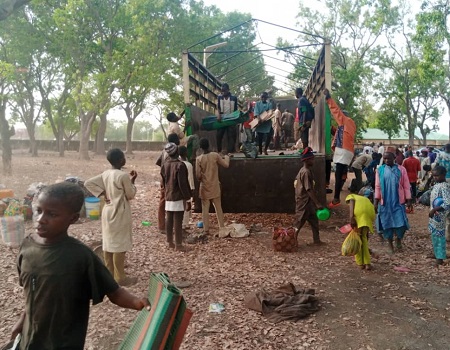 No fewer than 210 Almajiris out of the 680 that were returned from neighbouring states following the outbreak of Coronavirus have been discharged by the Kaduna State government.

The commissioner for Human Services and Social Development, Hafsat Baba, stated this on Sunday while addressing the children.

She said the discharged almajiris were tested negative from the virus after two weeks of being quarantined.

Baba noted that the discharged children were among those repatriated from Kano, Plateau, Bauchi, Gombe and Niger states.

She said the children would be handed over to their local government chairmen who would, in turn, hand them over to their parents.

“These children were from Kudan, Makarfi, Ikara, Giwa and Zaria Local Government Areas of the state and were brought back from states like Kano, Bauchi, Gombe, Niger and Plateau States.

“We are happy to say that two 210 of them would be discharged today (Sunday) having completed their quarantine period of 14 days.

“Those that tested positive have been isolated but those discharged are free to go home and reunite with their family,” she said.

Explaining further, Baba stated that the children will not be allowed to beg anymore in the state because the government has already banned the Almajiri system in the state.

I’m Not The Cause Of Your Problem, Ortom Tells Benue Index Case
Governor Samuel Ortom of Benue State has informed the United Kingdom returnee who is the state’s COVID-19 index case, Mrs Susan Idoko Okpe, to redirect her grievances to the Nigeria Centre for Disease Control (NCDC), saying he is not the architect of her woes… Read full story

Warm Weather Doesn’t Curb COVID-19 Spread, Studies Reveal
Contrary to the general knowledge across the globe, two studies have revealed that warm weather does not kill off the coronavirus or curb its spread. The Daily Mail of UK reported that the studies, carried out by US and Canadian researchers, analysed more than 370,000 cases in thousands of different cities in… Read full story