• As Taskforce begins contact tracing after death of staff 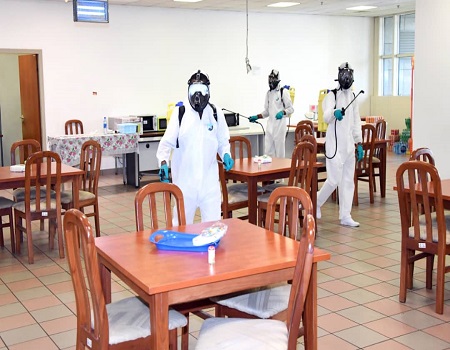 Palpable fear has gripped staff of Gombe Governor’s Office particularly the office of the Secretary to the State Government following the death of one of the Directors in the office whose sample tests returned positive of COVID-19 infection.

The development has, therefore, necessitated the closing of the office of the SSG as well as the Government House clinic to be fumigated after a confirmation that the COVID-19 test result of the government House staff who died Sunday returned positive.

The state Taskforce on COVID-19, through its Rapid Response Team, has already begun line listing and contact tracing following confirmation that the late Shuaibu Danlami, Director in the office of the Secretary to the State Government died of COVID-19 infection as contained in a statement by Ismaila Uba Misilli, Senior Special Assistant on Media and Publicity to the governor.

Chairman of the Taskforce, Professor Idris Mohammed, disclosed this at a press briefing where he equally confirmed that the test result of the late Director was among the 3 new COVID-19 positive cases the state recorded on Wednesday.

To this end, the Chairman said that all high-risk areas at the Government House, especially the office of the deceased, that of the SSG and the Clinic where he was admitted will be fumigated, closed and samples of the occupants collected for testing.

Professor Idris Mohammed also said that the Rapid Response Team (RRT) of the Taskforce has also begun tracing individuals who participated in the burial of the deceased and members of his family for counselling, testing and isolation if found positive.

The Gombe task force Chairman further said that “although we have managed to keep Gombe communities safe for well over 2 months now because of the proactive steps taken by the government, more efforts need to be put to check the spread.

He, however, warned that there is no clear evidence of community transmission of the COVID-19 because two of the seven deaths recorded in the state are individuals who have not travelled out of the state and said that the Taskforce has intensified efforts to ramp up sensitisation campaign through an expanded involvement of communities in the State.

Meanwhile, the Chairman Gombe State Taskforce on COVID-19 said Governor Inuwa Yahaya has approved the expansion and modification of the COVID-19 laboratory at the state specialist hospital.

The chairman said the approval followed a recommendation by officials of the Nigeria Centre for Disease Control, (NCDC) before the newly acquired PCR machine is installed.

It will be recalled that it was reported on Sunday that a Director in the office of the SSG died after a brief illness and when his samples were tested he returned positive to COVID-19 infection.

Gbajabiamila denies letter on extension of year of service for Clerk of NASS, other staff