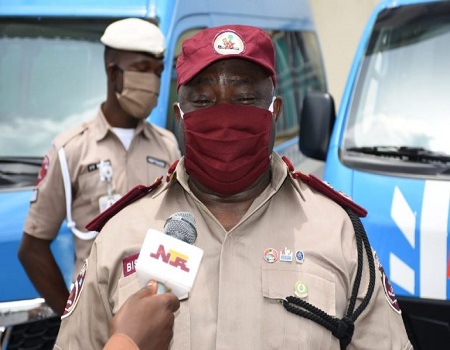 The Federal Road Safety Corps (FRSC) has approved the release of five ambulances with medical personnel for emergency response service to the Presidential Task Force (PTF) on COVID-19.

The FRSC Corps Marshal, Mr Boboye Oyeyemi, disclosed this in a statement by the Corps Public Education Officer, Mr Bisi Kazeem, on Wednesday in Abuja.

Kazeem said that 30 active Close User Group lines were also approved to facilitate the prompt evacuation of coronavirus patients from point of identification to isolation centres.

He said that the approval followed request by Dr Sydney Ibeanusi, the Country Director, UN Decade of Action on Road Safety and Traffic Injury Prevention in Nigeria, on April 24 on behalf of the PTF.

Kazeem said that Ibeanusi noted among others that FRSC had always been at the forefront of national commitment.

“He said that at this moment of global emergency, the PTF seeks to further the existing collaboration with the corps in the area of emergency response services in a bid to enhance established collective efforts,” Kazeem said.

He said that Ibeanusi assured the corps that the personnel detailed on this assignment would be catered for with adequate personal protective equipment and accommodation.

“Dr Ibeanusi said the detailed FRSC health workers will first be subjected to intense training on personal protection, handling of victims and decontamination of the vehicle among others.

“He said they are to work for two weeks, after which they will be subjected to two weeks isolation by the PTF in designated centres and certified negative before they reunite with their families and report back to duty,” Kazeem said.

He said that the corps would always be available to offer its services to support the PTF in the fight against the pandemic.