CoronavirusLatest News
By Olakunle Maruf - Sokoto On May 21, 2020 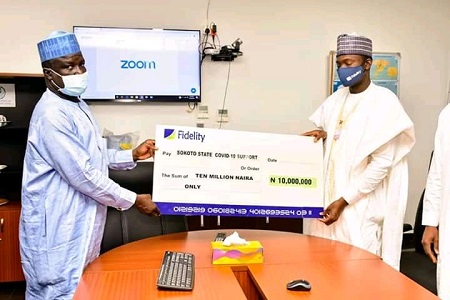 The management of Fidelity Bank plc has donated the sum of N10m to support Sokoto State government in its efforts to support to defeat COVID-19 in the state.

The donation which was handed to the state Tasks Force committee was received by the chairman of the Tasks Force and the commissioner for health, Dr Muhammed Ali Inname, on Wednesday.

Meanwhile, the state has increased its total number of tests with an additional twenty test from 589 to 609 on Wednesday with all the twenty tests returned negative.

This is according to a statement on the official Twitter handle of the ministry on Wednesday, the state number of positive patients remains 113 with total positive case stands at 25.

The total negative case also increased from 466 on Tuesday to 486 on Wednesday, while the total number of people discharged so far remains 75.