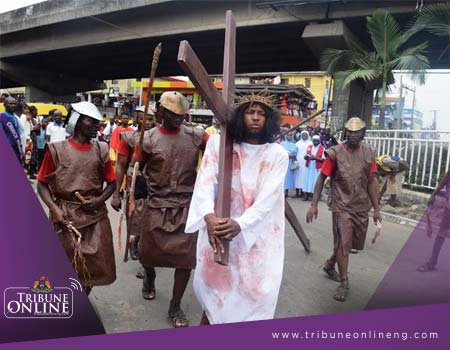 Federal Government on Thursday said it has no plan to suspend the lockdown policy as Christians throughout the Easter celebration scheduled to hold from Friday, April 10 to Monday, April 13, 2020.

Chairman, Presidential Task Force on COVID-19, Mr Boss Mustapha disclosed this during an interactive session with the leadership of the National Assembly, co-chaired by the Senate President, Senator Ahmad Lawan and Speaker of the House of Representatives, Honourable Femi Gbajabiamila, and other principal officers who expressed grave concern over the effects of the lockdown on the socio-economic well-being of the average citizens.

Mr Mustapha, who doubles as the Secretary to the Government of the Federation (SGF), explained that there was a need to evaluate the effectiveness of the 14 days lockdown on the ongoing efforts to contain the spread of the disease across the country.

He maintained that the responsibility of the PTF was to recommend while the final decision rests with Mr President.

Mustapha who argued that the Easter holiday falls within the 14-days lockdown declared by the Federal Government in the first instance was uncertain whether the lockdown will be extended or not.

In his earlier presentation, the PTF chairman disclosed that as of 9 am on Wednesday, April 8, 2020, there were 276 recorded cases with six deaths in Nigeria, with the spread reaching nearly half of the states of the federation.

“Lagos, our economic heartbeat is the epicentre with 145 cases – more than half of the total. Globally, countries with more advanced and sophisticated health systems than ours are struggling to deal with the cases in their own lands.

“We can be under no illusion that this case affects all of us, and it is on all of us to play our part in solving this,” he urged.

According to him, with particular reference to the restrictions, the number of cases recorded showed that Lagos and Abuja have become the high burden areas in Nigeria and that drastic measures were required as part of the containment strategy to prevent community transmission.

“The reason for the prevalence was attributable to the fact that both cities are major points of entry. Also, records showed that a higher percentage of the cases, including the index case were imported.”

While affirming that the pandemic has greatly exposed the weaknesses of Nigeria’s health system given the way more established health systems in Europe and America collapsed under pressure, Mr Mustapha assured that “the plan therefore is to lay a legacy foundation for the immediate, medium- and long-term development of the health system.

“To this end, the PTF has proposed to utilize the resources being mobilized in the following strategic manner: Direct development and delivery of critical infrastructure to States by donors; direct procurement and delivery of PPEs and other critical equipment by donors; deployment of rapid response teams to states for capacity building and support and expansion of the testing capacity in the country.”

Others include: Deputy Senate President, Senator Ovie Omo-Agege, Senator Omoworare; among others.

Let’s Be Fervent In Our Prayer For Divine Intervention —Lawan
THE Senate president, Ahmed Lawan has said that Easter is more relevant now that makind is passing through one of the darkest times in history… Read full article