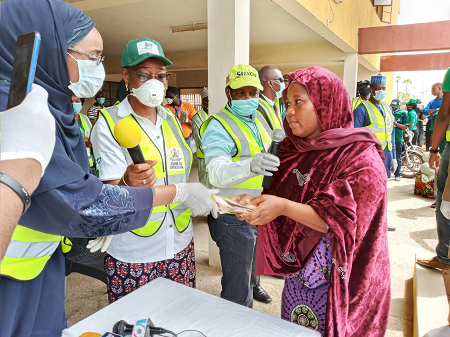 Federal Government, on Wednesday, flagged-off the disbursement of N20,000 conditional cash transfer (CCT) to over 1.2 million across 34 States of the Federation and Federal Capital Territory (FCT).

The Minister of Humanitarian Affairs, Disaster Management and Social Development, Hajiya Sadiya Umar Farouq, who presented the fund to some of the beneficiaries at the Kwali Area Council of FCT, expressed satisfaction at the successful implementation of the scheme which started in 2016.

Mrs Farouq said the N20,000 for the four months CCT payment was in line with the directives by President Muhammadu Buhari, aimed at cushioning the effect of the lockdown of Abuja, Lagos and Ogun States on the poor and vulnerable households. 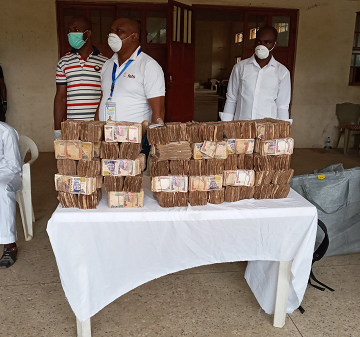 “This initiative has been ongoing for the past 5 years. It’s an exercise geared towards supporting the poor and vulnerable households of our society and we give them monthly stipend of N5,000 and now that we have the restriction, Mr President has directed that we give them 2 months advance payment.

“So we are here today to carry out that directive of paying the 2 months stipend.”

While responding to questions on the mode of selection of the beneficiaries, the Minister explained that: “it is a very long process, many people are involved, community leaders, religious leaders and the Council chairmen and his council members. They all come together and identify the poorest of poor and vulnerable households in that particular community.”

While reacting to allegations that the funds were distributed to APC members only, Mrs Farouq, who dismissed the allegation, argued that, “that is very untrue. You are free to ask the beneficiaries and they will tell you the method adopted in identifying the beneficiaries.”

“And it will interest you that this programme is not just about the cash transfer alone. It is a cash-plus programme, we give them money we also train them on how to be self-sustaining; they take care of their hygiene, they take care of their businesses; if you don’t have a business, how you can start a business; and then we also teach them on nutrition, environmental sanitation. So it’s a full package for the household. That is why the programme is known as household uplifting programme,” she said.

On the rationale behind the payment of the 2-month stipend, she explained that most of the poor live in places where there are no banking infrastructure.

“Where the poor reside, there are no banking infrastructure, so you cannot pay them through the bank, we pay through mobile banking operators as you can see, it is through transferred electronic payment as you have just witnessed. And then we need to pay these mobile money operators so the more the payment the more we pay. So that is why we now put two months together so they pay every two months. We started paying this money since 2016 with 8 states.

“The questions why 8 states? They are the ones that are ready. States came on board at different times because there are conditions that the states must meet before we begin to do the transfer.

“We have 34 States on board now. Today, each beneficiary is getting four months and that is N20,000. For this ward, the number of beneficiaries is about 190.”