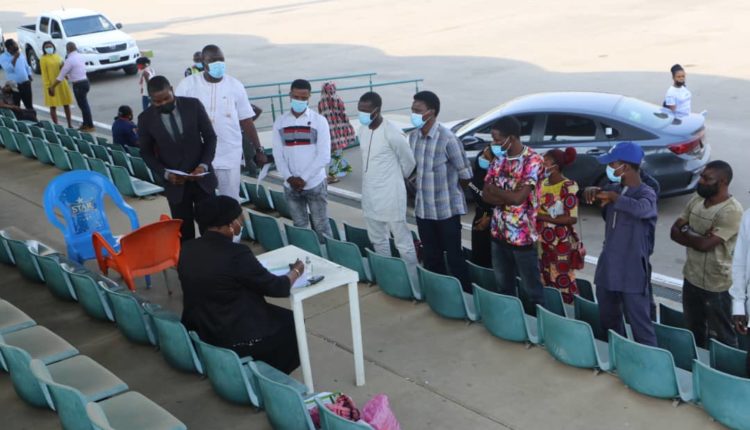 The Federal Capital Territory Administration (FCTA), on Tuesday, threatened to shut down the popular Bannex plaza and EFAB mall at Wuse 2 and Area 11, respectively if they continue to flout the COVID-19 rules and regulations guidelines.

Head, Media, Enlightenment and Publicity of the Task Force, Comrade Ikharo Attah, made this known while speaking with newsmen in Abuja.

He said the warning became imperative due to the flagrant violation of COVID-19 protocols observed in both plazas.

Attah, who addressed newsmen after a sitting of the FCT mobile court, however, said most of the offenders brought before the court were picked up from the two plazas.

According to him: “We went out on routine patrol where we looked at key areas. We looked at plazas, we looked at the malls and traffic issues and so far 49 arrests were made and brought before the FCT mobile court. Her Lordship, Idayat Akanni in her wisdom discharged two persons.

“We observed that many people are getting relaxed and we are getting them to understand that the Presidential Executive Order on COVID-19 protocols is very much in place and we in the FCT under the FCT Minister, Mallam Mohammad Musa Bello, and the Police Commissioner for the FCT, Bala Ciroma, we are kin at enforcing and ensuring that it actually works.

“From the arrest we made today, we got too many people arrested from the EFAB Plaza at area 11 and Bannex Plaza in Wuse II. These two plazas need to, as a matter of extreme urgency, need to put their plazas in order to, get all the washing points ready and ensure that those who come into the plaza comply by wearing their face masks. Because at the point we are in now, if the plazas do not comply, we are going to be shutting down Bannex Plaza as well as the EFAB plaza if they fail to comply in the shortest time. When we shut down the Wuse market and UTC plaza, there was much outcry and some persons believed we did not give them much warning.” He stated.

Meanwhile, all the 47 persons tried before the mobile court for the violation of face mask pleaded guilty and were given a N2, 000 fine or an option of community service.

The data also showed that the tally of 100 deaths last week shows there is a sharp increase when compared to the 69 deaths recorded in the previous week…COVID-19: FCTA to shut down Banez, Efab plazas, convicts 47 offenders