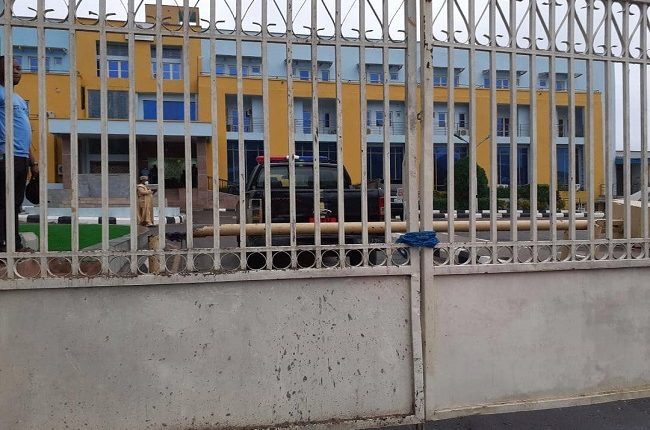 Operatives of the Ekiti State Task Force on COVID-19 have shut down a popular hotel in Ado-Ekiti, the state capital Delight Hotel and Suites for operating against government’s regulations to contain the spread of the virus.

As parts of efforts to contain the spread of COVID-19 in Ekiti, the state government directed that social gatherings like weddings, burials and other parties must not exceed 20 persons in attendance.

It also insisted that such gatherings must comply with 6-feet social distancing, wearing of face masks and handwashing facilities must be made available at such events.

An elaborate wedding party attended by a large crowd of guests in which physical distancing was not observed landed the hotel in trouble.

The hotel, located on Ilawe Road in the state capital, was also sealed off for breaching government’s order on lockdown during weekends.

The unexpected swoop on the hotel by the Task Force brought the wedding to an abrupt end as some of the guests fled on sighting security men on the team.

The hotel has since become desolate as the two main gates leading to the complex and its glass doors leading to its reception were still firmly locked at the time our correspondent visited on Sunday.

The Coordinator of Ekiti State COVID-19 Task Force, Professor Bolaji Aluko, said the operatives acted on a tip-off that the hotel contravened government’s regulations of gathering more than 20 persons.

He warned residents of the state especially owners of relaxation centres against violating the COVID-19 regulations noting that government won’t relax in enforcing the regulations to safeguard public health.

Aluko said: “We got a report that a wide and an elaborate wedding party was held at Delight Hotel and Suites on Ilawe Road and we swung into action to know the veracity of the claim.

“Then we discovered that the hotel actually broke the COVID-19 protocols.
We sent security operatives to go there and check and when the team went to check, they saw a large crowd of people in the hotel eating and drinking.”

Aluko, however, declined to reveal whether arrests were made during the raid stressing that the task force closed down the hotel for violation of COVID-19 regulations.

Efforts to speak with the hotel manager were unsuccessful as his mobile phone remained switched off as of press time.