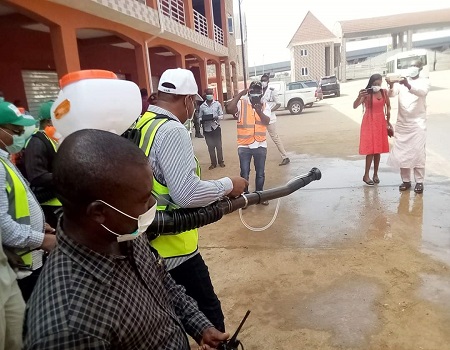 As part of efforts to contain the spread of coronavirus (COVID-19) to the Ebonyi State, Governor David Umahi on Sunday commenced the fumigation of markets and other public places in the state including the old and new state government houses and stadium in the state.

Flagging off the exercise at the state international market in Abakaliki, state deputy governor, Dr Kelechi Igwe, noted that disinfecting public places will help to reduce the risk of contracting the virus in the state.

According to him, the exercise has shown the state government’s preparedness to secure the lives of its citizens, charging other states who are yet to do so to emulate Ebonyi State.

Tribune Online reports that Igwe urged the state residents to try and maintain environmental hygiene while they take other precautionary measures to contain the spread of coronavirus. 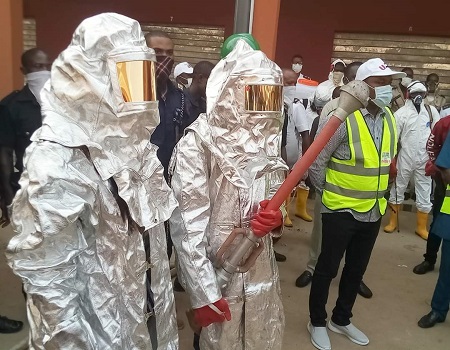 Commissioner for Health, Dr Daniel Umezuruike, reiterated that the exercise was necessary as some of the world’s diseases are being transmitted by insects and wild animals.

He added that the exercise took place on Sunday because of the side effects of the chemicals and called on the people of the state to use face masks while going to the market from Monday.

“The chemicals as used are quite different, the decontamination is to remove the microorganisms on surfaces and also to make the air and environment convenient for human habitation.

“The fumigation is more advanced because we are going to be killing rats, flies, mosquitoes and reptiles. Anything within that environment will die or relocate to far distant places.

“Because it comes in phases, today’s own is mild decontamination of microorganisms on surfaces and the air. So this place will be open by tomorrow. We have carefully chosen Sunday when people will not be around because of the effect of the chemicals.

“We are also going to emphasize the use of face masks which has started. Everybody that is allowed to stay in public places has to wear a face mask and it’s going to be implemented from tomorrow so that if there’s anything that is still remaining in the air, the chance of inhaling it will be much reduced.

“So, all these are the safety measures we have adopted to ensure that people remain safe during this period of coronavirus pandemic.”

The commissioner for Information and State Orientation, who also doubles as the acting commissioner for Human Capital Development, Hon. Uchenna Orji, stated that both the new and old government houses, as well as the stadium, would be fumigated, adding that the fumigation would be a routine exercise.

“The governor has directed that every Sunday there will be no market in the International market and Kpirikpiri market. The idea is to use that opportunity to fumigate those places.

“It’s going to be a periodic event and for the International Market and Kpirikpiri market. Every Sunday they would be closed so that health workers will fumigate the place.

“We also have a partial close down in the state. Our borders shut down while essential services are going on,” he stated.