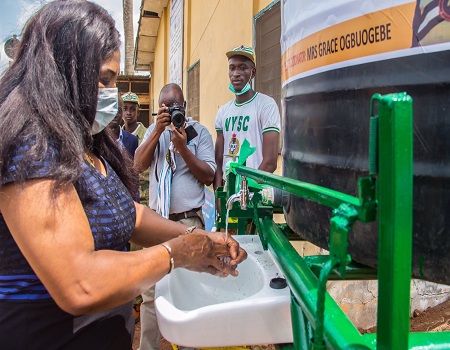 NYSC Oyo State Coordinator, Mrs Grace Ogbuoegebe, who commissioned the project commended the corps members for their “innovation, commitment, patriotism and support” for the scheme in the state.

She noted that the innovation was necessitated as the NYSC Director-General, Brigadier General Shuaibu Ibrahim had earlier challenged corps members across the country to come up with brilliant measures that will help curb the spread of COVID-19 in the country.

Ogbuoegebe further explained that the project was meant to be a complete automated hand washing machine, but due to the lockdown, the corps members were unable to get materials to complete the machine.

She, however, commended their efforts tasking other corps members in the state to emulate, imbibe and follow their selfless initiative.

Addressing newsmen the corps members stated the project was conducted in a bid to contribute their own quota towards the fight against the pandemic ravaging the country.

He noted that the device is operated with the leg and not the hand to avoid a spread of the virus which as at press time has killed 22 with 665 cases recorded in the country.