COVID-19: Bauchi to establish testing laboratory, gets 2 ambulances, other donations from NEDC

Latest NewsCoronavirus
By Ishola Michael - Bauchi On May 3, 2020
Share 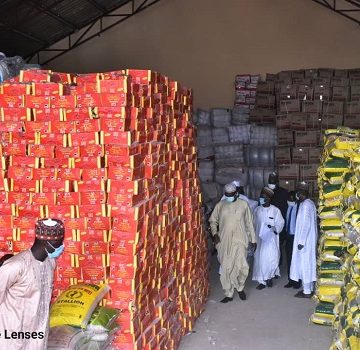 Worried by the increasing number of COVID-19 positive cases in the state coupled with the rigours of going to Abuja for testing, Bauchi State Government has declared that it will soon establish its own testing laboratory.

The declaration was made by the State Deputy Governor, Sen Baba Tela, while receiving the donation of two fully equipped ambulances and other medical consumables from the North-East Development Commission (NEDC).

He said that already the government has secured a place for citing of the laboratory following the earlier move by NCDC to establish a centre in Bauchi lamenting however that the NCDC did not make good its promise.

He pointed out that, “We have just had an agreement with you to support us for the establishment of our COVID-19 testing centre to be cited at the Specialist Hospital Bauchi. We are grateful that today you have donated to us 2 ambulances and other equipment required for the operations of the centre.”

The Deputy Governor who is also Chairman of State Rapid Response Taskforce Committee on COVID-19 and Lassa Fever stressed that everything possible will be done to curtail the spread of the infection in the state.

Sen Baba Tela commended the NEDC for the donations which he said has come handy in good time when palliation was needed for the people of the state in the face of the ravaging COVID-19 pandemic.

He further assured that the items donated will be evenly distributed by the Committee set up by the State Government under the leadership of the Emir of Bauchi, Dr Rilwanu Sulaiman Adamu pointing out that other items so far received as the donation will be pulled together for distribution.

The Deputy Governor also disclosed that plans have reached an advanced stage by the State Government to establish its own testing laboratory calling on the NEDC to come in and assist the government in that direction.

He noted with satisfaction, the support of the North East Development Commission to not only the state but to all the states of the region and pledged to ensure judicious distribution of the items donated.

While handing over the items, Representative of North-East Development Commission (NEDC), Yerima Gashua, explained that the donated items are two fully equipped ambulances and other medical equipment including ventilators, incinerators and other consumables to Bauchi State government to assist it in the fight against the spread of the COVID-19 pandemic in the state.

Also donated were bags of rice, beans, jerricans of groundnut oil, palm oil, seasonings and other food items worth several millions of Naira.

“Your Excellency, at the level of the Commission, we considered it as necessary for us to assist states in the North-East sub-region to curb and overcome the challenges caused by the outbreak of the COVID-19 pandemic.”

He added that “We are ever ready to support Bauchi State in the establishment of its testing centre, in addition to the ambulances and other facilities we donated to you, we will work closely to ensure the centre commenced operations soon.”

He stressed that “As soon as the state government provide the structure and any other thing they are capable of providing, the Commission will come and complete the testing laboratory without any delay.”