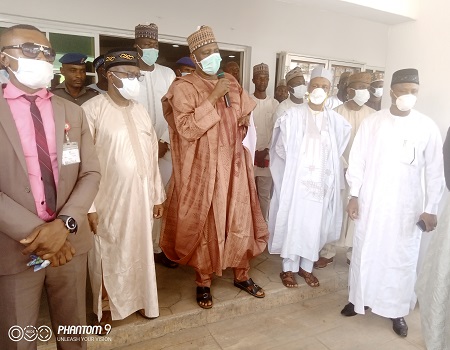 Bauchi State government has reviewed the total lockdown of the state scheduled to commence today because of what it described as a lack of palliative measures for the people.

While announcing the review during a press briefing at the Government House, state deputy governor, Sen Baba Tela explained that the government was concerned that no palliative arrangement was made to cushion the effects of the lockdown period.

He explained that “you know that in other states, adequate palliative measures have been taken and distributed to the people but here in Bauchi, we did not make such arrangements because we are still expecting from the federal government”.

However, we are going ahead to close our borders so that possible carriers of the virus will not infiltrate our state”, the deputy governor stressed.

Sen Baba Tela who is Chairman of the Rapid Response Taskforce on COVID-19 and Lassa fever stressed the importance of maintaining the social distancing practice, washing of hands, keeping Hygienic living conditions and other precautions to avoid transmission of the infection.

He further said that religious gatherings though allowed should be observed in accordance with the social distancing practice saying, “we are not forcing but appealing to people to ensure that the COVID-19 infection did not spread”.

Baba Tela also disclosed that food items worth about N34m mostly 3,600 bags of rice were donated by a rice mill company in the state calling on other prominent individuals and business people in the state to as a matter of necessity extend hands of giving to complement government’s efforts.

He also disclosed that the North East Development Commission and the NCDC have donated medical items including hand gloves, sanitizers, two ventilators and nose masks which will be put to use immediately.

The Deputy Governor then announced that the situation in the state remains the same in the past three days which is, 99 people tested out of which only 3 came out positive of COVID-19 while others were negative.

He added that “all the three positive index cases are responding well to treatment, two will soon be discharged and be reintegrated to the public after the final sample test. The governor urges the Clergy and others to continue to pray for the state so that the virus will not go beyond what it is presently”.

It will be recalled that the government had declared a total lockdown of the state effective from 6 pm today to check the spread of the infection.