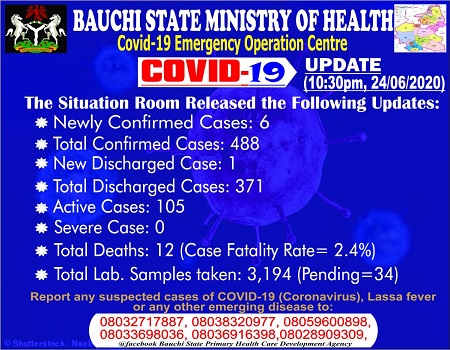 Bauchi State has recorded one new death from the COVID-19 infection just as 6 new confirmed positive cases have been reported after their samples tested positive.

Information from BAUCHI COVID-19 SITUATION REPORT indicated that the patient died as a result of complication while only 1 person who recovered has been discharged on Thursday.

As of Wednesday, 24th June, 105 positive patients are currently the active cases in the state and will continue to receive proper medical care until their samples test negative.

So far 3,194 samples had been investigated but only 488 people appeared to have been infected with the Coronavirus and already 371 persons have been discharged from the health facilities.

So far, the total number of confirmed cases in the state is 488 while the Total number of people so far on hospital’s admission stands at 105.

The Emergency Operation Center laments that “Our people disbelieve on the virus was simply because people have not been dying in numbers. It is quite unbecoming to be reluctant and wait after the disease ravaged our communities before taking action. The reason for the current action is to avoid what we call ‘medicine after death’. ”