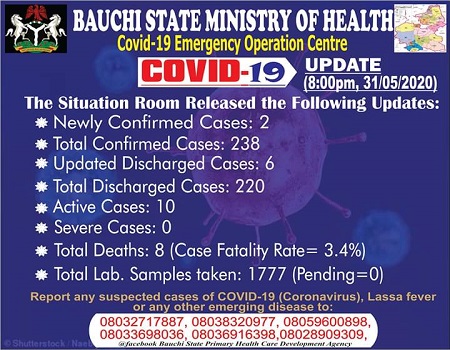 Bauchi State has recorded another death of a COVID-19 patient who died at the treatment centre following complications, bringing the total number of deaths to 8.

Information from the Bauchi COVID-19 situation report obtained by Tribune Online revealed that two new cases were reported as of Sunday, 31st May 2020 while 6 people again had their second tests returned negative and have been discharged.

So far, a total number of 220 people have been discharged out of the 238 total number of confirmed cases in the state since the index case discovered in the month of March.

The state active cases have continued to fall rapidly and only 10 patients remain in the hospitals receiving the required treatment while the percentage of case fatality rate rallied at 3.4

The state total samples taken and tested figured is 1,777 of which 238 persons have been confirmed by the Laboratory as those who had been infected with Coronavirus in the state.

ALSO READ: We won’t back down on NDDC probe — NASS

The commencement of sample testing at the newly opened molecular Laboratory in Bauchi which has been connected to the NCDC network, testing for COVID-19 status will be quick.

Meanwhile, Executive Chairman of Bauchi State Primary Health Care Development Agency (BASPHCDA), Dr Rilwanu Mohammed has tendered an unreserved apology over media reports which quoted him as saying that illegal abortion was responsible for deaths of women in Azare.

Rilwanu Mohammed in an apology letter he personally signed and made available to journalists Sunday evening stated that “Therefore, on behalf of myself, the Bauchi State Primary Health Care Development Agency and Bauchi State Network for Public Health Reporters, I hereby tender my heartfelt apology to the good people of Bauchi State who felt offended by such misquoted remarks”.

In the apology letter, he stated that “My attention has been drawn to a media report, misquoting me with a statement, which says “illegal abortions by unqualified medical practitioners has killed 200 women in Bauchi, as well as the cause of the mysterious death in Azare and other local government areas in the northern part of the state.”

“There was nowhere during the media brief where I made such remarks or attacked any community or mentioned any part of the state as being prevalent with highest cases of unwanted pregnancies as the media reported”, he further stated.

Rilwanu Mohammed explained that “In my remarks, I said if Childbirth Spacing Services are properly administered it will reduce the number of mysterious deaths in women by 200 per cent and avoid the risk of illegal abortions caused by unqualified medical personnel at the expense of getting quick money”.

The BASPHCDA Executive Chairman further explained that “The event was never organised by  Bauchi State Government but rather Bauchi State Network for Public Health Reporters themselves with the aim of sensitising members of the public on the importance of Childbirth Spacing and improve uptake of these services in the state”.

“I was seriously disturbed and amazed by such report and therefore wish to state categorically that it is not in my character to make such derogatory remarks against any part of Bauchi State. I wish to call on the media to always check their reports before going to press so as to avoid causing confusion and disunity among the people”, he concluded.

Earlier on Sunday, the Bauchi State Primary Health Care Development Agency (BASPHCDA) had described as misrepresentation reports in the media that illegal abortions by quack medical workers are responsible for mysterious deaths in Azare, headquarters of Katagum LGA.

In a press release signed by the Information Officer, Ibrahim Sani the Agency stated that the Executive Chairman was quoted out of context when he spoke during a media interactive roundtable with members of the Bauchi Public Health Media Network (BAPHMN) last weekend.

The release contained that while emphasizing the importance of accessing childbirth spacing services by all women of childbearing age, he stressed that when such was done it will reduce untimely death caused by illegal abortions done by quacks.

The release further contained that the BASPHCDA Chairman actually stressed that accessing CBS services will reduce unplanned and unwanted pregnancies which normally lead to seeking illegal abortions by quack by 200 per cent.

The Agency stated that it did not indict any community nor zone of the state of such acts regretting whatsoever damage the report must have caused that section of the state mentioned in the media reports and thereby dissociated itself from it.

While commending working Journalists in the state who are committed to reporting health issues which he said has really contributed to the steady and progressive development so far made in the health sector, he advised the Journalists to always cross-check their facts and clarify statements made at any public function before going to press.