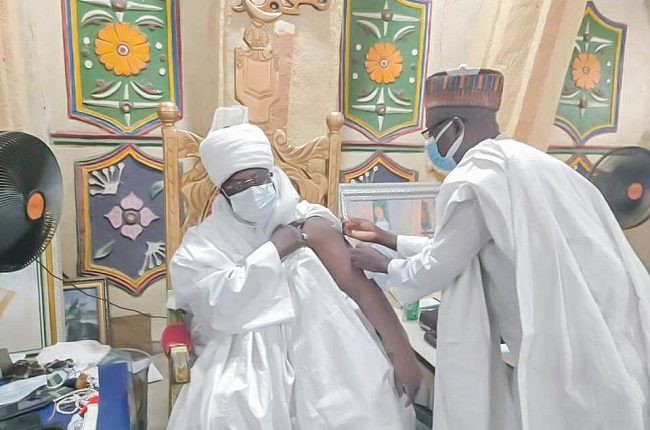 Emir of Bauchi, Alhaji (Dr) Rilwanu Sulaimanu Adamu has joined the league of Nigerians who has taken the first jab of the AstraZeneca COVID-19 vaccination.

The Emir who is the Chairman of Bauchi State Traditional Council took the jab at his Palace on Friday and was administered by the Executive Chairman of BASPHCDA, Dr Rilwanu Mohammed.

Shortly after administering the vaccine on the Emir, Rilwanu Mohammed said that it was As part of taking precautionary measures against COVID-19 in the state that the vaccination is taking place with the doses received from the NPHCDA.

The Executive Chairman of Bauchi State Primary Health Development Agency, Dr Rilwanu Mohammed further said that vaccination is very necessary in order to fight the pandemic stressing that it has the potency to do that.

He added that “This has further proven the safety and the authenticity of the Oxford Astrazeneca vaccine as traditional leaders and political leaders continued to show examples without hesitation”.

The BASPHCDA Boss however advised that any side effects should be reported to the nearest health facility for prompt attention saying however that since the vaccination began in the state, there has been no report of any harsh reaction.

In his brief remarks, the Emir of Bauchi, Dr Rilwanu Suleiman Adamu called on people of the state to make themselves available for vaccination against covid-19 pandemic because according to him that is the only way to fight the pandemic.

The Emir attested to the effectiveness and potency of the vaccines based on reports from across the world as leaders have taken jabs of it with little or no side effects.

The traditional ruler then commended the Bauchi State Government for ensuring that the vaccine came to the state advising that all frontline health workers and others should be vaccinated first in line with the directives from the federal government.

In spite of the huge investment in the water sector by the government and international organisations, water scarcity has grown to become a perennial nightmare for residents of Abeokuta, the Ogun State capital. This report x-rays the lives and experiences of residents in getting clean, potable and affordable water amidst the surge of COVID-19 cases in the state…Bauchi Emir takes first jab  Bauchi Emir takes first jab