• As Residents scramble for items 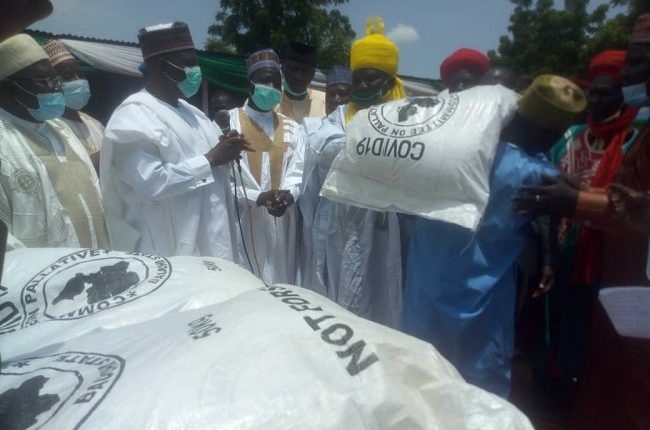 While officially launching the distribution of COVID-19 palliative items to 3500 households in Warji LGA of the state, Bauchi State governor, Sen Bala Mohammed stated that the gesture was meant to cushion the hardship caused by the pandemic on citizens.

The governor who was represented by the deputy governor, Sen Baba Tela while handing over the food items to the district head of Warji, said that the items were not meant to wipe out the needs of the beneficiaries but to ameliorate their sufferings for the meantime to enable them to find their bearings.

The governor noted that Warji is the eleventh local government area to have benefited from the gesture since the beginning of the distribution exercise shortly after the outbreak of the COVID-19 pandemic in the state.

The governor who said that the government was distributing the palliatives to Warji local government in the first instance, assured that more are coming along the way.

Bala Mohammed assured that “As we get more palliatives from donors such as Coalition Against COVID-19 (CACOVID) who has been in the forefront in sending relief materials to us and the federal government through the federal ministry of humanitarian affairs, disaster management and social development, we will continue to gage and continue to distribute palliative materials to the people of Bauchi State as at when due”.

He urged those who might not benefit from the first round of the distribution to exercise patience pending when another round of distribution will take place.

The governor then expressed confidence in the palliative distribution committee at the local government level, hoping that the materials will go down to the targeted persons that are the neediest in all nooks and crannies of Warji.

Shortly before he read the speech of the governor, Baba Tela stated that “The governor directed that I personally come here together with all the people that are involved in the distribution and distribute or hand over the palliatives to the most senior district head, that is the district head of Warji who is the chairman palliative committee in the area”.

He added, “So far, the Bauchi State government has distributed palliatives to ten local governments. In Warji, we are bringing 3500 units of relief materials to 3,500 households”.

The deputy governor also said that each unit of the palliative contains beans, rice, maize, Maggi, sugar, macaroni, cooking oil, amongst others.

Speaking earlier, Chairman of Bauchi State COVID-19 palliative distribution committee, the Emir of Bauchi, Dr Rilwanu Suleiman Adamu, commended the governor for working tirelessly to contain the spread of the pandemic in the state.

Represented by a member of the committee, Senator Bala Kariya, the Emir said that the distribution of the palliatives is coming few days after the governor visited some communities in Warji to commiserate with victims of the flood.

He also said that the idea behind handing over the palliatives to the traditional institution for onward distribution to the beneficiaries was due to the fact that they belong to all segments of the society regardless of their religious or tribal affiliations and expressed optimism that the food items would be distributed equitably.

Head of Administration of the Warji local government area, Alhaji Abubakar Ibrahim Mohammed thanked the governor for the gesture and advised the distribution committee members in the area to ensure that the items got to the targeted persons.

Meanwhile, It was a survival of the fittest situation when residents of Katanga Warji, headquarters of Warji LGA of Bauchi State, scrambled for the 3500 units of assorted food items meant as a palliative to the people of the LGA which was to be distributed to the neediest in the area.

Immediately after the state governor, Sen Bala Mohammed Abdulkadir officially launched the distribution by the ceremonial presentation to few people and left the scene, anxious people rushed to the items and scrambled for them not minding the consequences of their actions.

The security operatives around the LGA Secretariat could not control the surging crowd and just stood helpless as the items were scrambled for by the mob that had waited for the ceremony to be over.